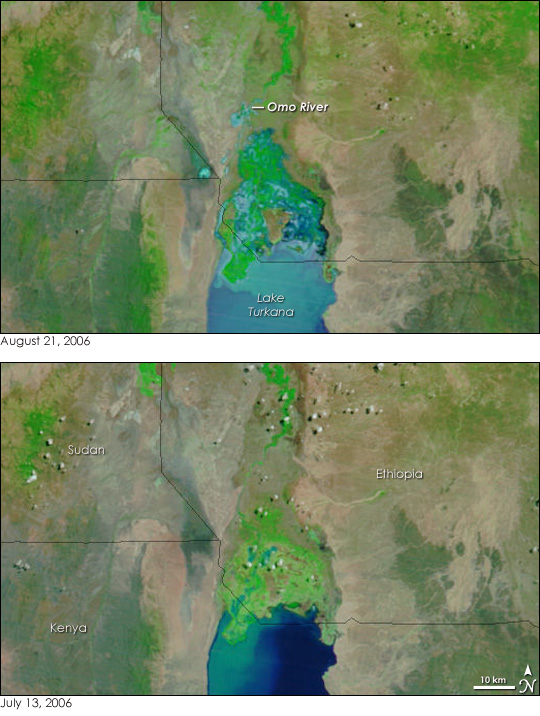 Though much of Ethiopia was flooded in August 2006, one of the greatest tragedies occurred along the Omo River in southern Ethiopia. Unusually heavy rains during the last week of July and the first weeks of August pushed the Omo River over its banks in the South Omo Valley. The floods surrounded 14 villages, trapping thousands of people, said the United Nations Office for the Coordination of Humanitarian Affairs. By August 16, 364 people had died and 1,300 more had been airlifted out of their flooded homes. Approximately 6,000-10,000 people had been displaced, said the United Nations.

These Moderate Resolution Imaging Spectroradiometer (MODIS) images illustrate the wide extent of the floods. In the top image, taken on August 21, 2006, the Omo River is spread across most of its wide delta, effectively expanding Lake Turkana several kilometers northward. Another indicator of flooding is the color of the water. Normally, water is dark blue in this type of false-color image, as Lake Turkana was on July 13 in the lower image. When sediment clouds the water, it turns the water turquoise or pale blue. By August 21, the heavy rains had been falling for nearly a month. As mud-laden flood water drained into Lake Turkana, it clouded the water, giving it the pearly blue color seen in the top image.

These images are shown in false color to highlight the presence of water on the ground. In this color combination, clouds are light blue and white, plant-covered land is bright green, and land that is sparsely vegetated is tan. Daily images of Ethiopia are available from the MODIS Rapid Response Team in both false color and photo-like true color.