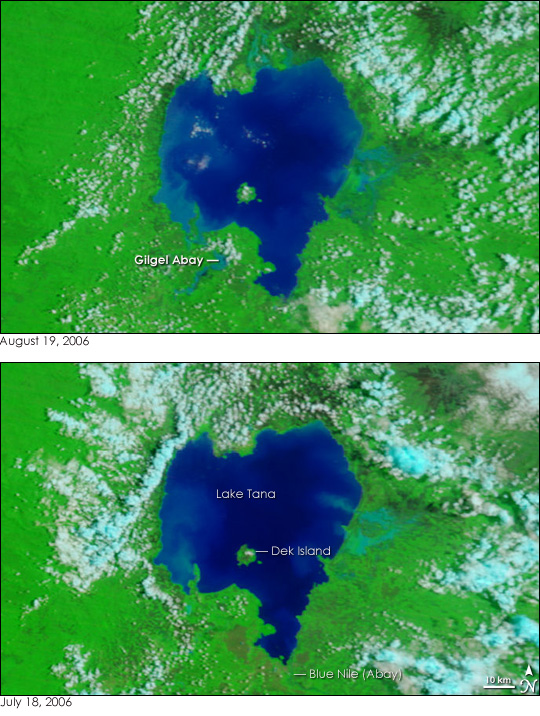 Unusually heavy rain soaked the Ethiopian Highlands during the last week of July and the first two weeks of August 2006. As the water drained out of the highlands, rivers across Ethiopia rose to disastrously high levels, many bursting their banks and inundating cities and villages. By August 21, 766 people had been confirmed dead as a result of flooding or flood-related disease, and thousands more had been forced from their homes, reported the United Nations Office for the Coordination of Humanitarian Affairs.

Among the rivers that drain the rain-drenched highlands is the Gilgel Abay, which flows into Lake Tana in northern Ethiopia. Lake Tana, in turn, is the source of the Blue Nile River, which joins with the White Nile River in Sudan to become the Nile. Like many other rivers that flow out of the highlands, the Gilgel Abay was flooded on August 19, 2006, when the Moderate Resolution Imaging Spectroradiometer (MODIS) on NASA’s Terra satellite captured the top image. The river is not normally visible in MODIS images. The lower image, acquired before the heaviest of the rains began falling at the end of July, shows only the slightest of hints that the river even exists. But on August 19, the Gilgel Abay was larger than the Blue Nile to its east. The flooded river is pale blue, an indicator that its waters run thick with mud. The muddy water clouds Lake Tana where the river enters. Additional flooding may be occurring on other rivers that flow into the lake from the north and the east. In these places, rivers are similarly pale blue from sediment. More than 10,000 people in the Lake Tana region had been displaced because of floods, said the United Nations.

These images are shown in false color to highlight the presence of water on the ground. In this color combination, water is normally dark blue, though sediment-clouded water is lighter in color; clouds are light blue and white; and plant-covered land is bright green. Daily images of Ethiopia are available from the MODIS Rapid Response Team in both false color and photo-like true color.

Flooding in Colombia and Venezeula

February is typically the dry season in northern South America, but in 2005, unusual torrential rains triggered deadly floods in Venezuela and Colombia.