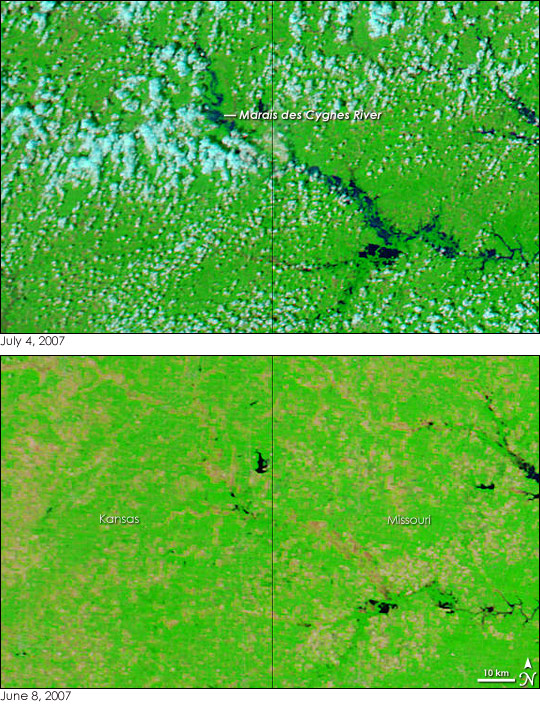 According to the U.S. Geological Survey, the Marais des Cygnes River was 10 feet above flood stage in Ottawa, Kansas, on July 4, 2007, when the Moderate Resolution Imaging Spectroradiometer (MODIS) on NASA’s Aqua satellite captured this image. The river is not normally visible in MODIS images. In the lower image, taken on June 8, 2007, by Terra MODIS, the river’s course is defined only by the tan, plant-free land that surrounds it. But on July 4, the dark blue water of the swollen river is clearly visible. The floods along the Marais des Cygnes forced 2,000 people from their homes in Osawatomie, Kansas, reported the Kansas City Star, but by July 4, water levels on the river had started to drop.

Additional flooding along the Neosho and Verdigris Rivers can be seen in the large image. These images were made with visible and infrared light to highlight the presence of water on the ground. In this type of image, water is black, though sediment may color it dark blue. Clouds are light blue and white, and plant-covered land is bright green. Bare earth is tan-pink.

Daily images of Kansas are available from the MODIS Rapid Response System in both false color, as shown here, and photo-like true color.