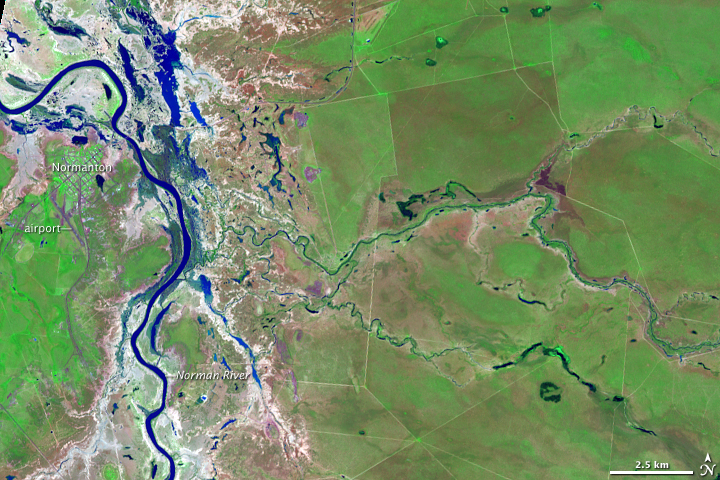 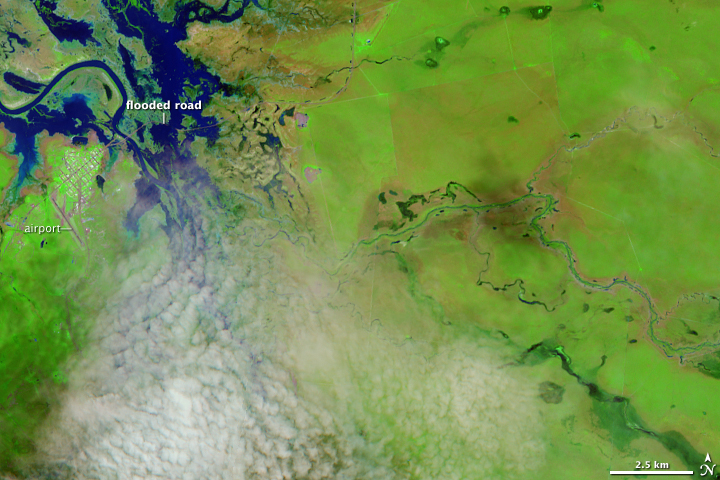 The extensive flooding that had surrounded Normanton, Australia, had largely subsided by March 25, 2009, when the Advanced Land Imager on the EO-1 satellite captured the top image. The floods had cut off the small city, located in northern Australia, for weeks. The lower image, from March 12, shows water over roads leading into Normanton. When the March 12 image was taken, the worst of the flooding had receded. Just under two weeks later, the flooding was all but gone. The water in the Norman River and its tributaries was mostly confined to the rivers’ channels, and the roads leading into Normanton appeared to be clear.

Though the images aren’t detailed enough to reveal damaged buildings or roads, they do show what the floods did to the land. Plant-covered land is bright green, while bare or lightly vegetated earth ranges in color from pale tan to pink. In this view, it is clear that the land that was covered with water for several weeks had little or no vegetation. Normanton looks like a gridded island of green surrounded by bare land on the west, north, and east.

This type of image is very useful for monitoring floods and vegetation. Unlike a natural- color image, which is more like a digital photograph, these false-color images, composed of infrared and visible light, show all water in dark blue, making it easy to see any water on the ground. (To compare natural color and false color, see the natural-color version of the March 12 image.) The clear contrast between plant-covered land, which is bright green, and bare ground also helps measure the response of vegetation to the flood and, if applicable, the associated rainfall.