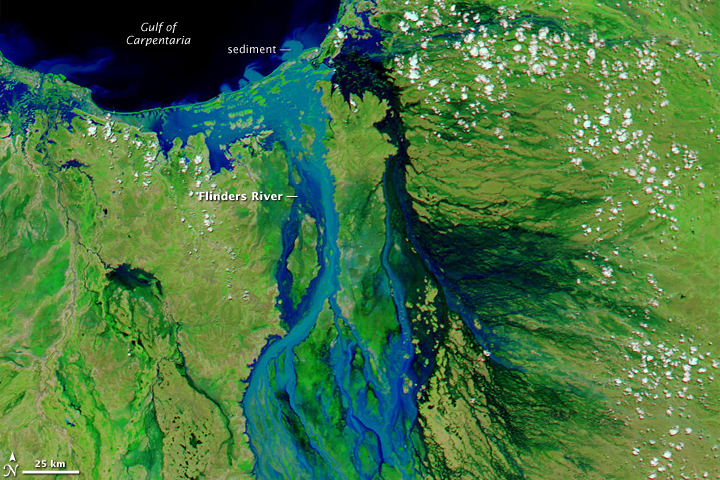 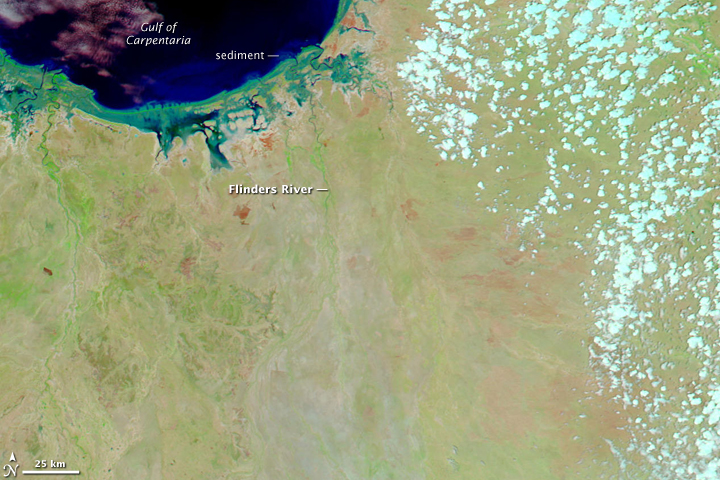 Even while southeastern Australia battled high heat and the most deadly fires in their history in February 2009, much of the rest of Australia flooded. Wet-season rains brought severe flooding to Western Australia, Queensland, and New South Wales. The most widespread flooding was in Queensland, where more than one million square kilometers flooded, reported the AFP wire service. This image shows flooding along the Flinders River system in northern Queensland.

The image was taken by the Moderate Resolution Imaging Spectroradiometer (MODIS) on NASA’s Aqua satellite on Feburary 18, 2009. The lower image was taken on December 16, 2008, before the weeks of rain started. In December, the various rivers that make up the Flinders River System were discernible only by the lines of green vegetation that followed their courses through the dry land. Two months later, the flooded river system, with its myriad channels, covered more than 100 kilometers from east to west.

The water ranges in color from pale blue to black in these images, which include both infrared and visible light to increase the contrast between water and earth. Lighter blue water is either extremely shallow (merely moistened mud channels) or thick with sediment. Clearer or deeper water is black. At least some of the pale blue water is colored with sediment because dense plumes of sediment poured into the Gulf of Carpentaria.

In addition to causing floods, the intense rain sustained plant growth. In two months, the color of the landscape changed from tan-pink, the color of bare or sparsely vegetated ground, to green, the color of plant-covered land.

The floods shown here isolated communities in northern Australia, including Karumba and Normanton near the mouth of the river system. Taiwan’s Formosat-2 satellite captured a detailed image of the floods in Normanton on February 19, 2009.