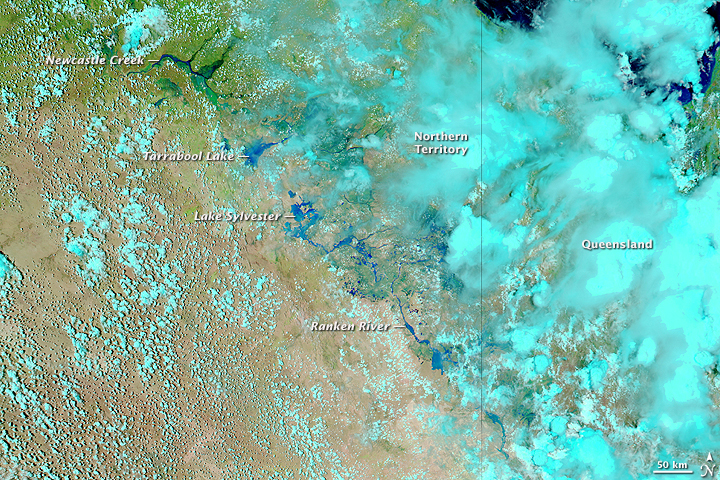 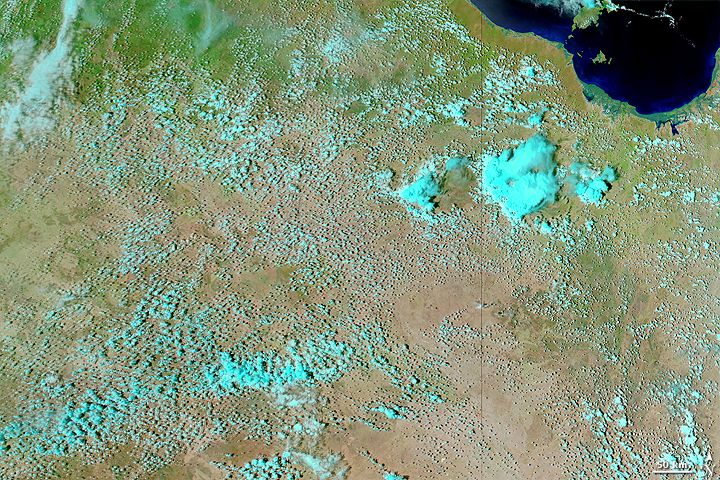 “In the first five days of 2009, north-west Queensland has received almost as much rain as it did for the whole of last year,” reported the Australian Broadcast Corporation News (ABC News) on January 6, 2009. The rains led to flooding, which cut off towns, stranded travelers, and caused more than 12 million dollars in damage, said ABC News. A break in the clouds provided the Moderate Resolution Imaging Spectroradiometer (MODIS) on NASA’s Aqua satellite a glimpse at the extensive flooding in northern Australia on January 6, 2009. Water, blue and black in this image, covers a wide swath of Northern Territory and extends under the clouds into western Queensland.

The lower image, provided for contrast, shows the Northern Territory-Queensland border region on December 25, 2008, before the flood-inducing rain started. Both images are false-color, made with visible and infrared light to highlight water on the ground. Water is typically black in this type of false-color image, but when mixed with sediment, it can be blue. In this case, some of the lighter blue regions may be moistened soil. Wet-season clouds, present in both images, are turquoise blue and white. Plant-covered land is green, while sparsely vegetated ground is tan.

By the time that MODIS captured this image, the floods had started to recede. Despite the damage caused by the floods, the rains are a relief, says ABC News. Drenching rains are common during the summer wet season, but recent years have been dry. The early January downpour replenished dwindling reservoirs providing water to small towns in the Australian Outback.

Daily images of Australia are available from the MODIS Rapid Response System.