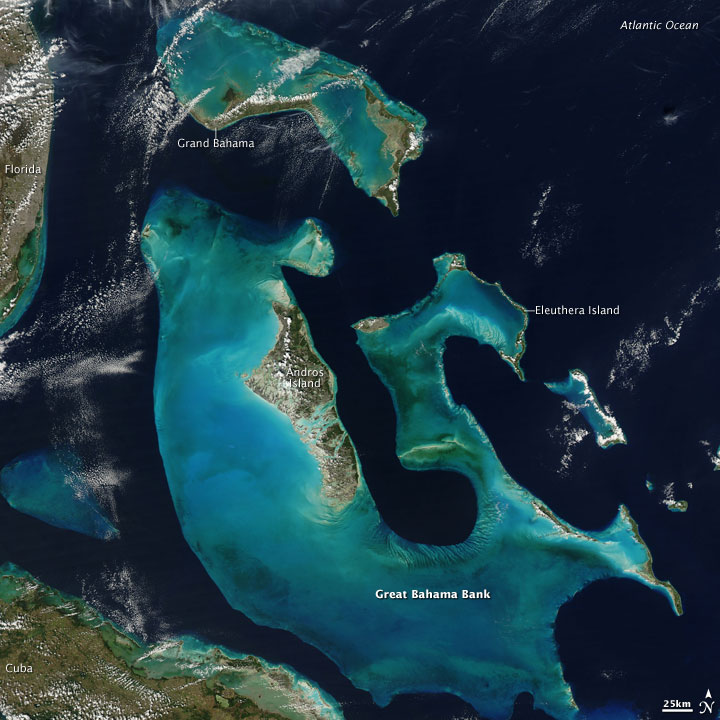 East of southern Florida, large swaths of ocean water glow peacock blue. These waters owe their iridescence to their shallow depths. Near Florida and Cuba, the underwater terrain is hilly, and the crests of many of these hills comprise the islands of the Bahamas. On February 12, 2009, relatively clear skies allowed the Moderate Resolution Imaging Spectroradiometer (MODIS) on NASA’s Aqua satellite an unobstructed view of the region.

The most striking feature of this image is the Great Bahama Bank, a massive underwater hill underlying Andros Island in the west, Eleuthera Island in the east, and multiple islands in between. To the north, another bank underlies another set of islands, including Grand Bahama. The varied colors of these banks suggest their surfaces are somewhat uneven. The banks’ distinct contours, sharply outlined in dark blue, indicate that the ocean floor drops dramatically around them. In fact, over the banks, the water depth is often less than 10 meters (33 feet), but the surrounding basin plunges to depths as low as 4,000 meters (13,100 feet).

MODIS is not the only satellite to capture beautiful images of the Bahamas. The region’s ocean water, sand, and seaweed make it equally dramatic in high-resolution satellite imagery.

The islands are situated on large depositional platforms composed mainly of carbonate sediments and ringed by reefs.