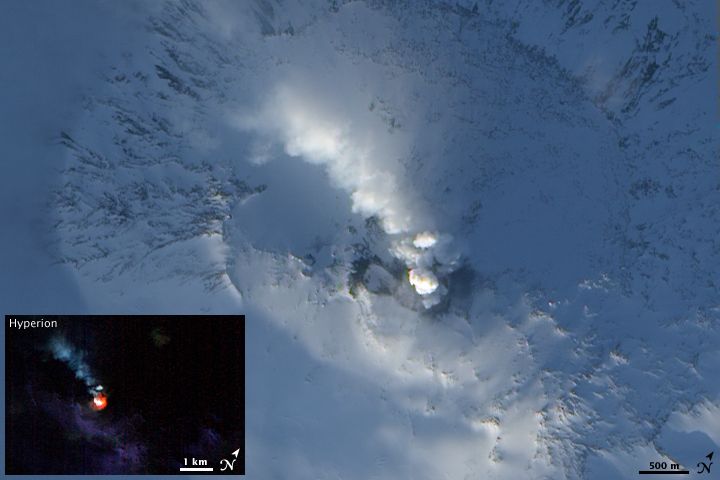 Antarctica’s Mount Erebus may be covered with glaciers, but they do little to cool the volcano’s molten core. The world’s southernmost volcano to show activity during recorded history, Erebus holds a lava lake and occasionally experiences explosive eruptions. In 2004, the reliable presence of a lava lake at this volcano’s summit made Mount Erebus the perfect place to test a self-directed satellite and sensor.

This image shows two views of Mount Erebus from February 6, 2009, captured by sensors on NASA’s Earth Observing-1 (EO-1) satellite. The larger image was acquired by the Advanced Land Imager (ALI), and the inset image was acquired by the Hyperion sensor. The larger image shows a true-color, photo-like view of the volcano, and the inset image shows thermal activity, highlighting the volcano’s molten lava lake.

On May 7, 2004, the Autonomous Sciencecraft Experiment on EO-1 first demonstrated its ability to detect volcanic activity by sensing thermal emissions at Erebus. After the initial detection, the satellite gave itself new orders to take fresh observations of the volcano several hours later. Scientists who subsequently examined the data EO-1 acquired confirmed that a genuine thermal emission had been detected. Since that time, EO-1 has been successfully employed to detect other volcanic eruptions, including those near densely populated areas.

This Mount Erebus image shows a fairly typical level of activity for the volcano, including a molten lava lake and vapor emissions. Erebus is a stratovolcano composed of alternating layers of solidified ash, hardened lava, and rocks ejected by earlier eruptions. The volcano was erupting when British explorer Captain James Ross first observed it 1841, and it has shown continuous lava lake activity since 1972.