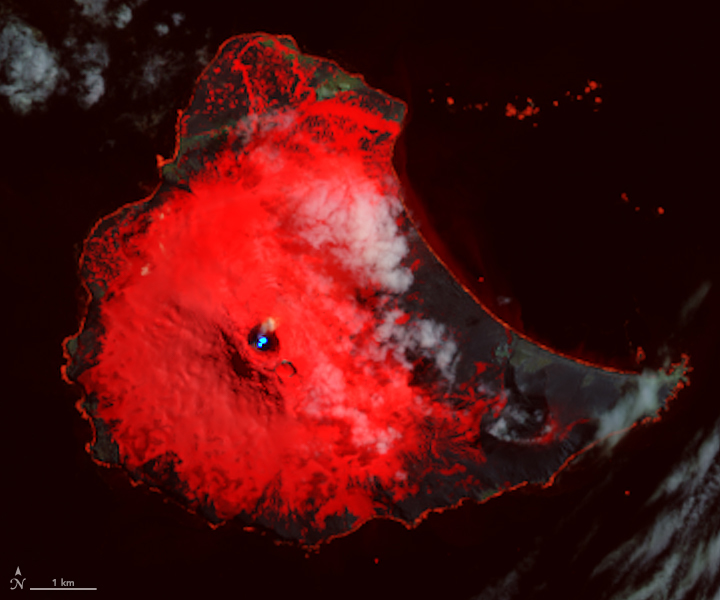 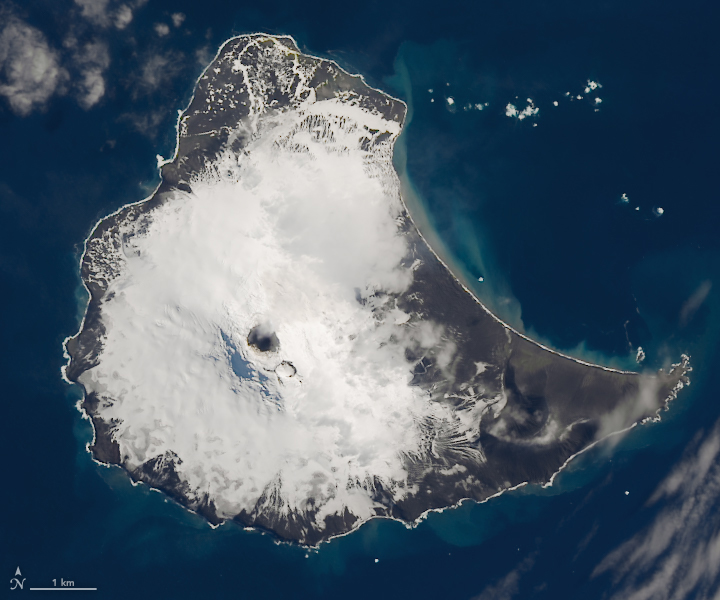 Even with modern scientific tools, there are still some parts of our planet that stay mostly hidden from human eyes. The crater floor of Mount Michael, an active volcano in the South Sandwich Islands of the South Atlantic Ocean, is one of those places.

On most days the crater on Saunders Island is obscured from satellite and aerial views by a layer of clouds, or by a volcanic plume streaming from its top. In the 1990s, scientists detected a thermal anomaly at Mount Michael and suspected that the mountain’s oft-hidden crater might contain a lava lake—a rare place where ponded lava persists between active volcanic eruptions. But the detection was made with relatively low-resolution satellite imagery. No one could say for sure if the feature was a stable lake or a temporary lava pool.

In new research, scientists analyzed the crater’s thermal anomalies in higher-resolution satellite images from Landsat, Sentinel, and ASTER. After examining three decades of images, they confirmed that the crater indeed cradles a stable pond of lava—raising the planet’s known number of lava lakes to seven.

One of those images is shown above. Acquired on January 31, 2018, by the Operational Land Imager on Landsat 8, the false-color image was composed from red and shortwave infrared light (bands 4-6-7). This band combination allowed the researchers to easily detect the thermal anomaly (blue). Snow appears red, and clouds and a small volcanic plume appear gray. By analyzing the shortwave infrared bands, the researchers could calculate the temperature of the lava lake and to determine the fraction occupied by molten and crustal lava.

The second image shows the same scene in natural color, similar to what the human eye would see. Notice that you can no longer discern the lava lake.

“The persistence of the anomaly and high temperatures was the key to identifying the lava lake,” said Danielle Gray, lead author of the research, which was published in July 2019.

Gray, a graduate student at University College London during the time of the research, pointed out that the brighter, light blue pixels are the hottest (284 to 419 degrees C). These are the pixels most likely to contain cracks of molten lava, which can measure up to 1279 degrees C. Darker blue areas are likely crustal lava.

The researchers estimated that the lava lake measures 110 meters (360 feet) wide, with an area of 10,000 square meters. That’s about the same surface area covered by eight Olympic-sized swimming pools.

“This is the first time 30 years of data from multiple satellites has been used to analyze Mount Michael’s lava lake,” Gray said. “This technique could be used to analyze other volcanoes retrospectively and to monitor them going forward, particularly those that are inaccessible due to location, politics, or safety.”

Mount Michael is not the only volcano to host a persistent lava lake in a remote location. Others are found in the craters of Ambrym volcano, Mount Erebus, Erta Ale volcano, Masaya volcano, Nyiragongo volcano, and Mount Yasur.