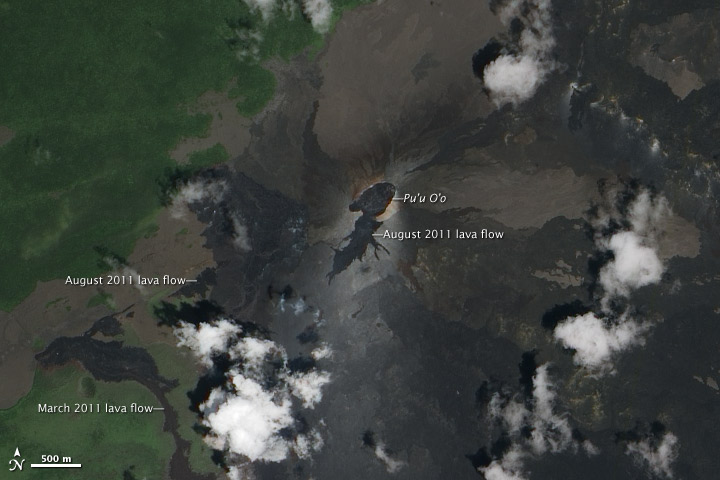 Although Kilauea Volcano has been erupting continuously for more than 25 years, the activity is anything but steady. From time to time, the flow of magma beneath the volcano shifts, causing old vents to close and new ones to open. From March—when lava fountains briefly appeared at the Kamoamoa Vents—until early August, most of Kilauea’s fresh lava was confined to a lava lake within Pu’u O’o crater.

On the afternoon of August 3, 2011, lava broke out 700 meters to the west of Pu’u O’o, followed shortly by a partial collapse of the crater and rapid draining of the lava lake. The activity formed two lava flows: one halfway between Pu’u O’o and the Kamoamoa Fissures, and another directly south of the crater. Within weeks, the western flow had slowed to a trickle, and the lake within Pu’u O’o began to refill. Intense heat from the lava lake causes Pu’u O’o to appear bright red in a false-color view of Kilauea.

This natural-color satellite image from the Advanced Land Imager (ALI) aboard the Earth Observing-1 (EO-1) satellite shows Pu’u O’o Crater and the surrounding area on September 7, 2011. The freshest lava flows are nearly black, contrasting with older flows that turn brown as they age. The oldest flows are covered with green ohia forest. Downwind of Pu’u O’o (south-southwest), persistent volcanic gas emissions have lightened the lava surfaces.