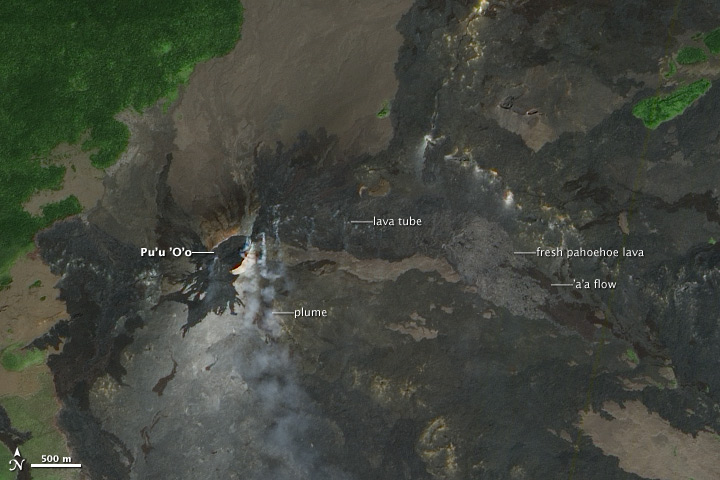 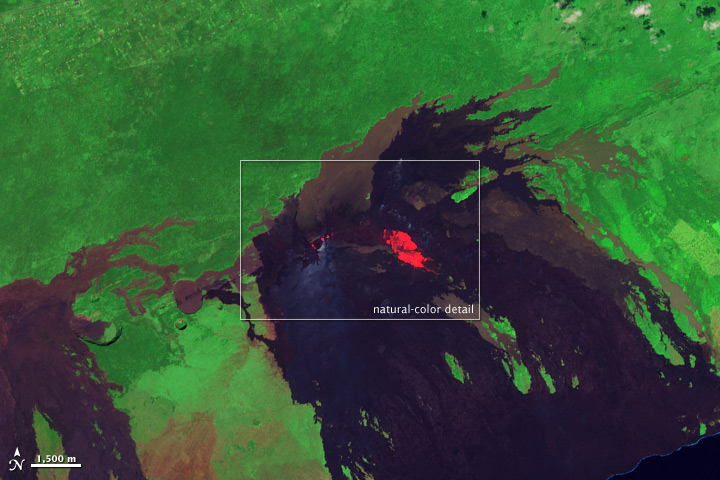 Since it began in 1983, the eruption of Kilauea Volcano has usually been centered at Pu’u ’O’o. Gray and brown lava flows radiate from the crater, with the varying shades due to differences in weathering, composition, and the lava’s initial temperature. Photographs of Pu’u ’O’o from the U.S. Geological Survey reveal the remarkable variety of colors and textures in the lava. The overlapping flows form a record of the evolving eruption. The extent of change since early September 2011 is remarkable.

This natural-color satellite image (top), acquired by the Advanced Land Imager (ALI) on Earth Observing-1 (EO-1) shows the recent lava flows as of October 29, 2011. A fissure opened in the flank of Pu’u ’O’o on September 21, draining a lava pond and spawning an ’a’a flow—thick lava that moves relatively slowly and hardens into rough blocks. Over the next few days, the narrow ’a’a flow traveled 3,400 meters (11,000 feet) from the vent.

More recently, gray pahoehoe lava (more fluid than ’a’a) covered most of the dark a’a’ flow. In a false-color image that combines shortwave infrared, near infrared, and green light (above, lower), the fresh lava is bright red, an indication that it was active at the time the satellite flew overhead.

The difference between pahoehoe lava and ’a’a lava is primarily temperature (although gas content, the degree of crystallization, and even slope has an effect). Very hot basalt-rich lava flows easily, while cooler lava with the same composition is more viscous. The current flows on Kilauea move through a lava tube until they emerge at the surface about 1,700 meters (5,600 feet) from the vent. The tube keeps the lava hot enough to remain fluid, resulting in pahoehoe flows. The path of the lava is revealed by a series of faint volcanic plumes (visible in the natural-color image) that extend eastward from Pu’u ’O’o.