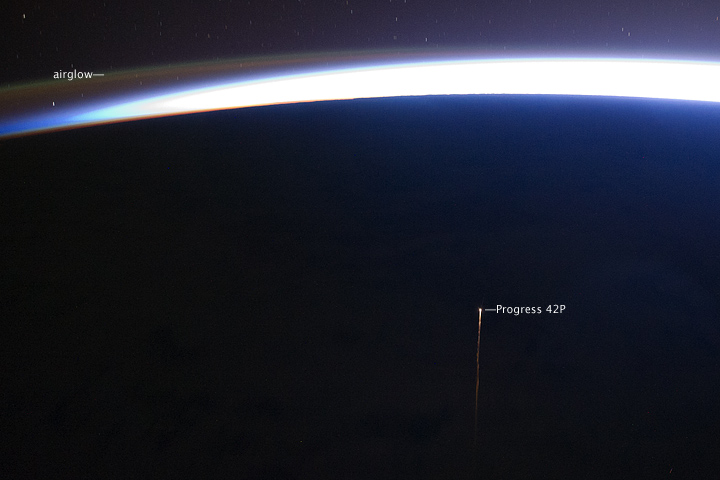 Have you ever wondered how the astronauts and cosmonauts onboard the International Space Station (ISS) take out the trash? Several times a year, robotic spacecraft carrying a variety of items—including food, water, fuel, oxygen, medical supplies, replacement parts, and research materials—are launched from Earth to dock with the ISS. These spacecraft are built and launched by ISS international partners in Russia, Japan, and the Europe. After the cargo has been transferred to the ISS, the spacecraft is refilled with refuse, and then undocked and de-orbited—essentially using the Earth’s atmosphere as an incinerator for both the spent spacecraft and the refuse.

This astronaut photograph highlights the reentry plasma trail of one such spacecraft, the ISS Progress 42P supply vehicle (Russian designation M-10M). The Progress is based on the Soyuz design, and can fly autonomously or under remote control from the space station. Progress 42P docked at the ISS on April 29, 2011, and was undocked and de-orbited on October 29, 2011. Astronauts on the ISS took a time-lapse sequence of the event; the image above is part of that sequence.

The ISS was located over the southern Pacific Ocean when this image was taken. Light from the rising sun illuminates the curvature of the Earth limb (horizon line) at image top, but does not completely overwhelm the airglow visible at image top left. Airglow is the emission of light by atoms and molecules in the upper atmosphere when they are excited by ultraviolet radiation.

Astronaut photograph ISS029-E-34092 was acquired on October 29, 2011, with a Nikon D3S digital camera using a 38 mm lens, and is provided by the ISS Crew Earth Observations experiment and Image Science & Analysis Laboratory, Johnson Space Center. The image was taken by the Expedition 29 crew. The image has been cropped and enhanced to improve contrast. Lens artifacts have been removed. The International Space Station Program supports the laboratory as part of the ISS National Lab to help astronauts take pictures of Earth that will be of the greatest value to scientists and the public, and to make those images freely available on the Internet. Additional images taken by astronauts and cosmonauts can be viewed at the NASA/JSC Gateway to Astronaut Photography of Earth. Caption by William L. Stefanov, Jacobs/ESCG at NASA-JSC.