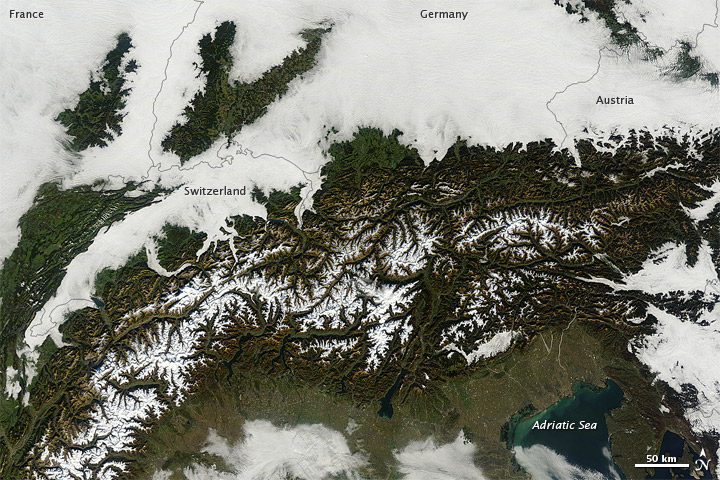 A massive cloudbank sprawled over central Europe in early November 2011, with clouds extending from the North Sea to the foothills of the Alps. Over the crescent-shaped mountain range, skies remained clear.

The Moderate Resolution Imaging Spectroradiometer (MODIS) on NASA’s Terra satellite acquired this natural-color image on November 10. Along the southern margin of the cloud bank, Alpine foothills predominate. Only the valleys hold the low-elevation clouds, or fog, and surrounding hillsides rise above it.

Fog is simply clouds formed at ground level. Like all clouds, fog forms when the local air reaches its dew point—the temperature at which water vapor condenses into tiny droplets. Sunlight typically warms the air and burns off fog, but as autumn advances and nights lengthen, valley fog becomes more common. If unperturbed by winds, such fog can persist for days.

Shortly after MODIS acquired this image, the clouds cleared away from central Europe, leaving mostly sunny skies north of the Alps. The LANCE/EOSDIS MODIS Rapid Response Team provides twice-daily images of this region

Clouds and snow whiten different parts of central Europe in this image from early November 2011.