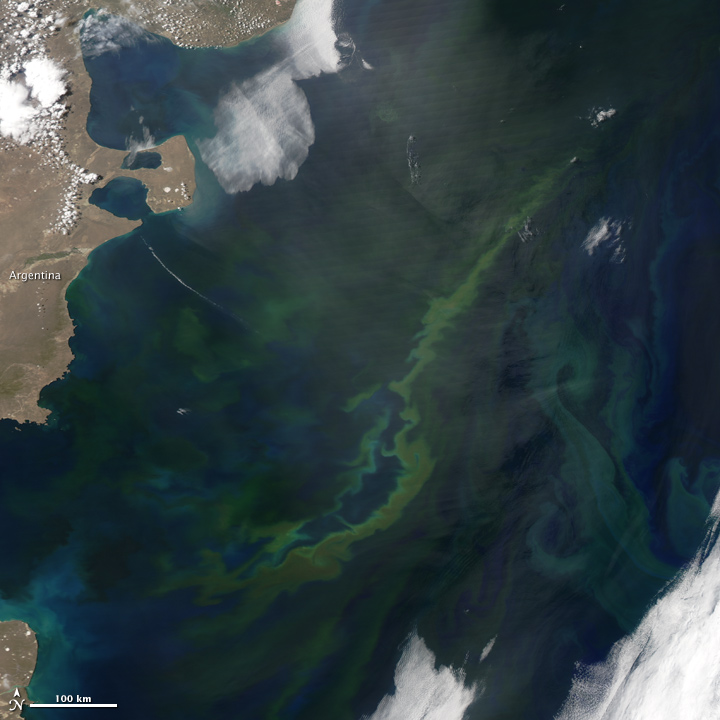 On a sunny spring day in November 2011, the clouds parted over coastal Argentina to reveal a massive bloom of phytoplankton coloring the ocean. Phytoplankton are microscopic, plant-like organisms that harness sunlight to turn carbon dioxide and water into sugars and oxygen (photosynthesis). They are the primary producers of the ocean and the center of the marine food web, providing food for everything from zooplankton to whales.

The Moderate Resolution Imaging Spectroradiometer (MODIS) on NASA’s Aqua satellite captured this natural-color image on November 5, 2011. The milky blue and green swirls are evidence of the abundant growth of phytoplankton across hundreds of kilometers of the sea.

The blooms develop frequently in southern spring and summer along the Patagonia “shelf-break front.” The region marks the transition between cold, nutrient rich waters of the Malvinas Current—which flows northward from the Southern Ocean along the undersea continental slope—and the warmer and fresher waters on the continental shelf, nearer to shore. The movement of the Malvinas Current along the sloped seafloor is believed to help nutrients (such as iron) well up from the bottom and fuel plant growth for several months.