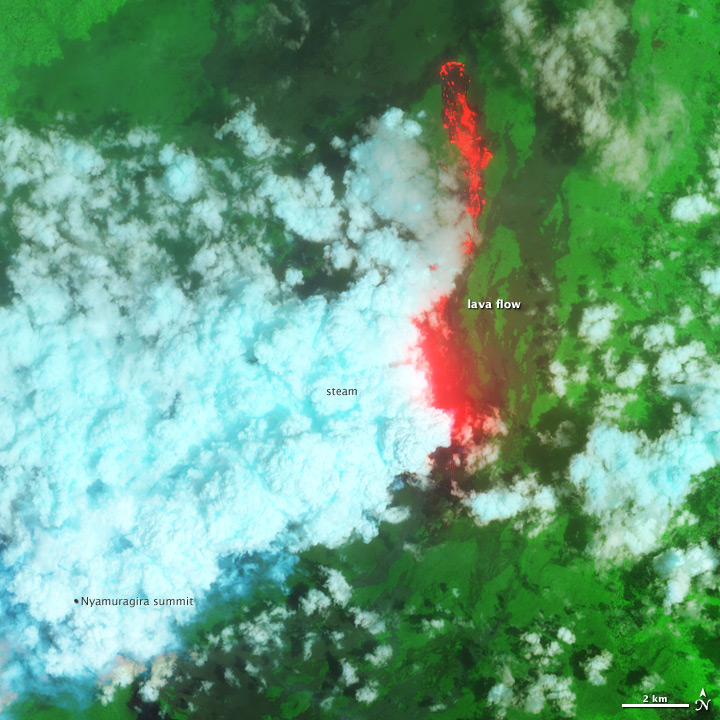 On November 6, 2011, after more than a year of relative peace, the Nyamuragira volcano in the Democratic Republic of Congo surged to life. Lava has erupted spectacularly from a fissure low on one of the volcano's flanks and spilled northward, away from populated areas. Nyamuragira is a shield volcano and one of Africa's most active.

For more than a week, cloud cover mostly obscured the view from space until the Advanced Land Imager on NASA’s EO-1 satellite captured images on November 12, 2011. This false-color view combines shortwave infrared, near infrared, and green light. Fresh lava is bright red, an indication that it was active at the time the satellite flew overhead. Billowing, blue-tinged steam clouds rise above the superheated fissure and lava-bathed landscape. In the full-size, wider view (available by link just below the image), the lava lake at nearby Nyiragongo volcano (to the south) glows red through the cloud cover.

A blogger and ranger from Virgunga National Park wrote:

...We hiked a bit further until we came to a section where the vegetation ended and the ground was covered in small pebbles of weightless lava gravel. The thundering roar of the volcano was incredible and the heat of the 100-meter column of lava clearly tangible...The eruption site is truly amazing. It’s located on a flat area, but the sides have been building up around the crack over the last week...The lava has a low silica content resulting in lava with a low viscosity (very fluid), which in turn results in the amazing lava fountain.

Ground-based video of the eruption is available here from the Virunga National Park. Wider satellite views of the landscape around the eruption on November 8 and November 16 are available online through the LANCE/EOSDIS MODIS Rapid Response Team.

Nyamuragira volcano began spouting lava into the skies above Congo in November 2011, sending up spectacular water vapor clouds as well. 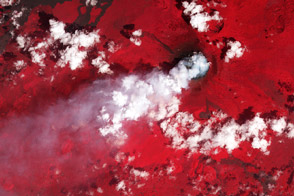