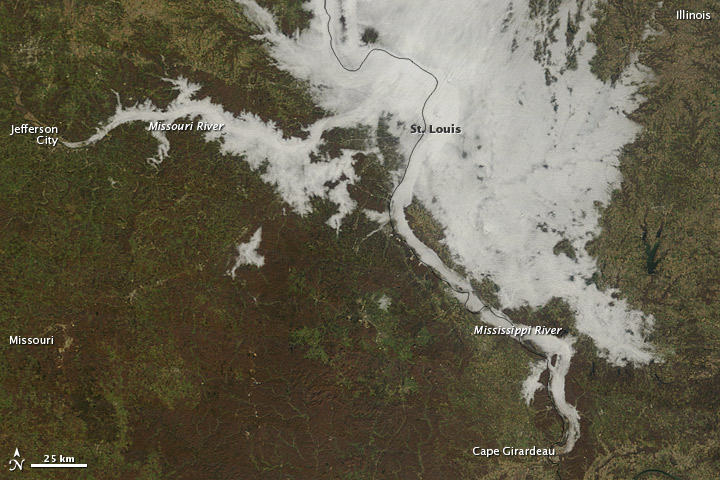 The day before Thanksgiving is one of the busiest travel days of the year in the United States. But on November 21, 2012, weather posed a challenge for people flying in and out of St. Louis, Missouri. It also posed a challenge for drivers making their morning commutes. Thick fog descended on the city overnight on November 20–21, and on the morning of November 21, visibility was as low as one-sixteenth of a mile (0.1 kilometers), according to news reports.

Fog lingered over the region when the Moderate Resolution Imaging Spectroradiometer (MODIS) on NASA’s Terra satellite captured this natural-color image at 10:45 a.m. local time (16:45 UTC) on November 21. Fog filled the Mississippi River Valley as well as the valleys of the Missouri River and many of its tributaries. Fog extended from Jefferson City in the northwest to Cape Girardeau in the southeast. Situated at the confluence of the Missouri and Mississippi Rivers, St. Louis was engulfed by low clouds.

Fog is simply clouds that have formed at ground level. Like all clouds, fog forms when the local air reaches its dew point—the temperature at which water vapor condenses into tiny droplets. In the autumn, the moisture content of the atmosphere remains relatively high, but nights are cool. Overnight, the ground tends to cool faster than the atmosphere, and air in contact with a cooling, sloped surface will slide down and settle in the valley floor. Because autumn brings longer nights, fog has more time to form and is a fairly common occurrence.