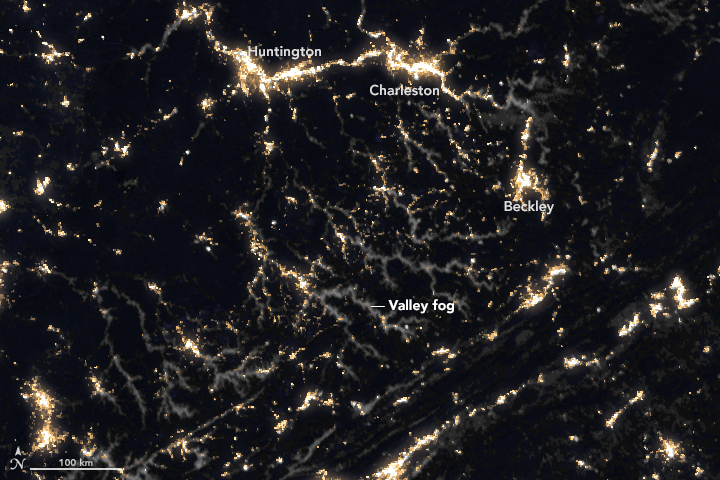 It’s autumn in the Northern Hemisphere, which means many people living in mountainous areas are awakening to fog-filled valleys.

As nights lengthen with the season, the atmosphere has more time to cool down and approach the dew point—the temperature at which the air becomes saturated and water vapor condenses into fog. Since cold air is denser than warm air, it sinks and drain into valleys, meaning fog develops there first. Many valleys also have rivers and streams, which amplifies the process by providing a ready supply of water vapor.

The Visible Infrared Imaging Radiometer Suite (VIIRS) on the Suomi NPP satellite captured a glimpse of this process at work in the mountains of West Virginia on October 24, 2018. The sensor acquired the nighttime image at about 2 a.m., when fog had filled many valleys of the Cumberland Mountains.

On the other side of North America, a rugged part of British Columbia had its own dose of autumn valley fog. Just before noon on October 22, 2018, the Moderate Resolution Imaging Spectroradiometer (MODIS) on Terra acquired a natural-color image of the narrow valleys that hold Okanagan Lake and Upper Arrow Lake. The false-color version of the same scene makes it easier to distinguish between snow (cyan) and fog (white). 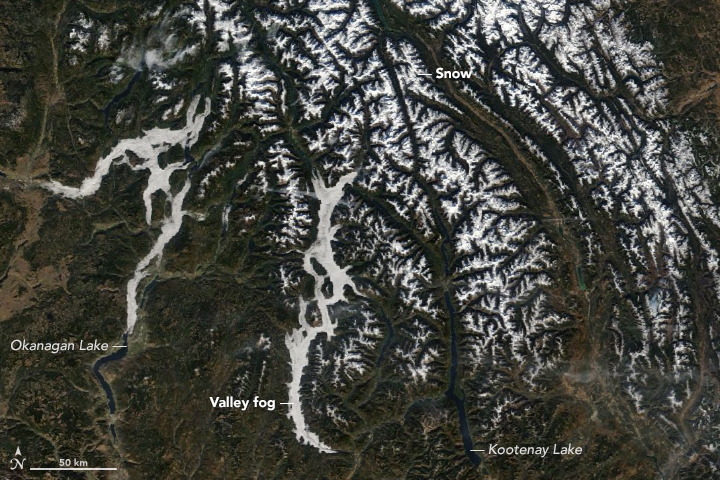 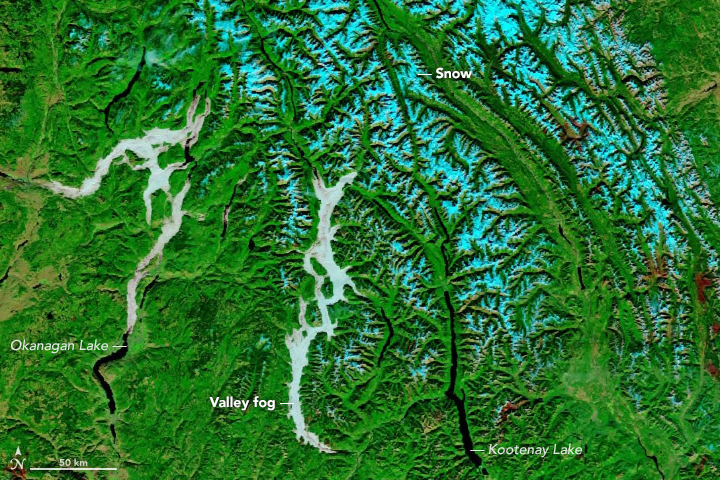 As the day progresses and temperatures rise, valley fog often fades away. The MODIS sensor on Aqua, which passed over the same area in early afternoon, highlighted the process. By afternoon, many of the areas that had been bathed in fog had cleared.

Sunlight piercing through valley fog can make for stunning scenery. If you find yourself at high altitudes in damp conditions, keep an eye out for glories and fogbows, beautiful optical phenomena that can emerge in the presence of fog and sunlight.

But be mindful also of the serious risks that fog can pose for drivers. Fog-related traffic accidents cause far more deaths in the United States each year than other high-profile weather events like heat waves, tornadoes, and floods, according to data from the National Weather Service and the Federal Highway Administration.