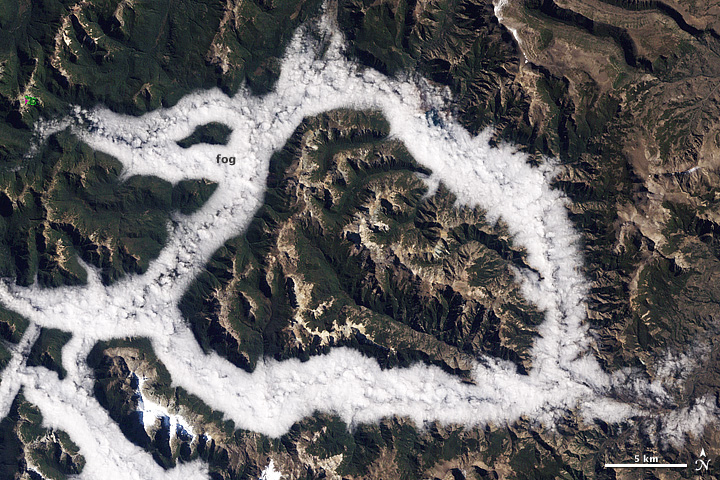 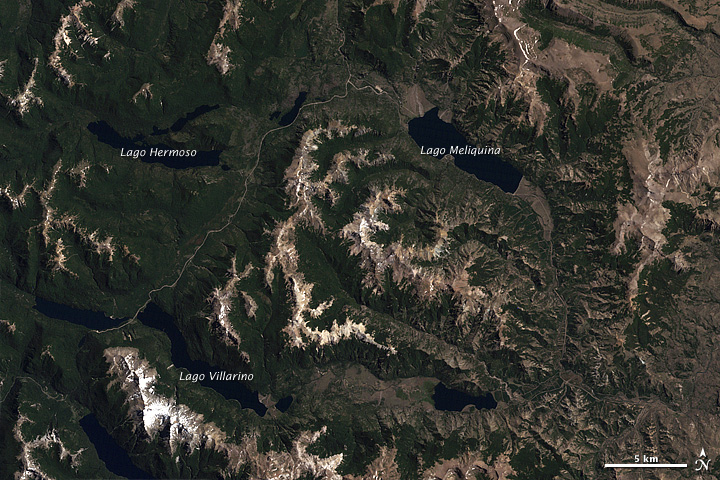 On the morning of March 29, 1987, the Thematic Mapper on the Landsat 5 satellite captured this scene of fog lingering in valley bottoms of Argentina’s Lake District.

The Lake District, a popular destination for travelers due to its dramatic alpine views and numerous glacial lakes, is located in the eastern foothills of the Andes, near the Chilean border. A number of large lakes—including Villarino, Hermoso, and Meliquina—lie below the fog, out of view. The bright green and pink blotch on the upper left of the image is missing data. The lower image, acquired by Landsat 5 on February 15, 2001, shows the same area on a fogless day.

Clouds are fields of water droplets or ice crystals suspended in the air. Fog is simply a cloud in contact with the ground. Like all clouds, fog forms when air is cooled enough that the water vapor within reaches its dew point, the temperature at which vapor condenses into liquid droplets.

Fog forms in a number of different meteorological circumstances, but the fog shown above is most likely radiation fog. This common type develops on clear, calm nights as Earth’s surface—and the air immediately above—cools overnight. Radiation fog is most likely to form when there is a layer of cool air near the surface and a layer of drier air above it. Since air near the surface is usually warmer than the air above it, reversals like this are known as temperature inversions.

In the case of the image above, the steep valleys facilitated the inversion. When air along the upper slopes of mountains begins to cool after sunset, it becomes dense and heavy, draining down the mountain slopes toward the valley floors. This cool air piles up in the lowest part of a valley, and it is there that fog is most likely to form.

“The fog boundaries are so sharp because, more than likely, they correspond to a particular altitude in the terrain, which corresponds to the height of the base of the temperature inversion,“ explained Patrick Minnis, a senior research scientist at NASA’s Langley Research Center.

Radiation fog can occur in the absence of underlying water, but in this case the lakes likely contributed by increasing the humidity near the surface. For the same reason, radiation fog tends to form in swampy areas or after a heavy rainfalls or snowmelts. It can be quite thick, posing a threat to boaters and motorists in the morning. However, it is usually short-lived. When the sun returns in the morning, the air near the surface heats up and fog usually burns off in a matter of hours.

“That texture you’re seeing in the fog is caused by convective processes that are starting to break it up,” noted Minnis.

NASA Earth Observatory images by Jesse Allen and Robert Simmon, using Landsat data from the U.S. Geological Survey. Caption by Adam Voiland. There were no winners this month. Stuart, David P., and Michael Osborn were some of the first puzzler players to get close.