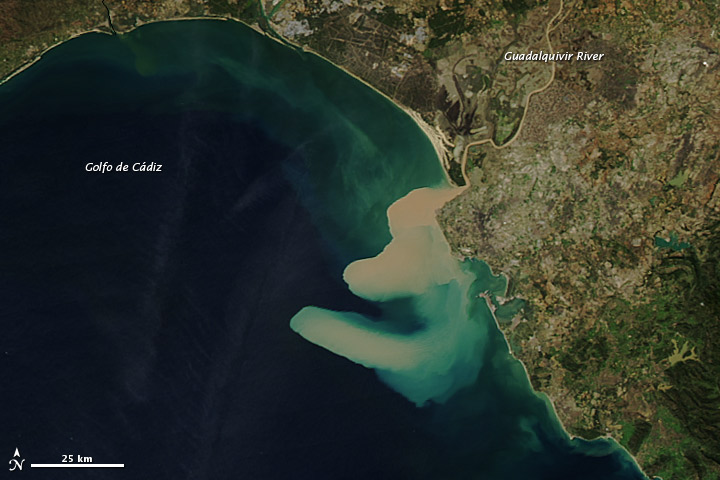 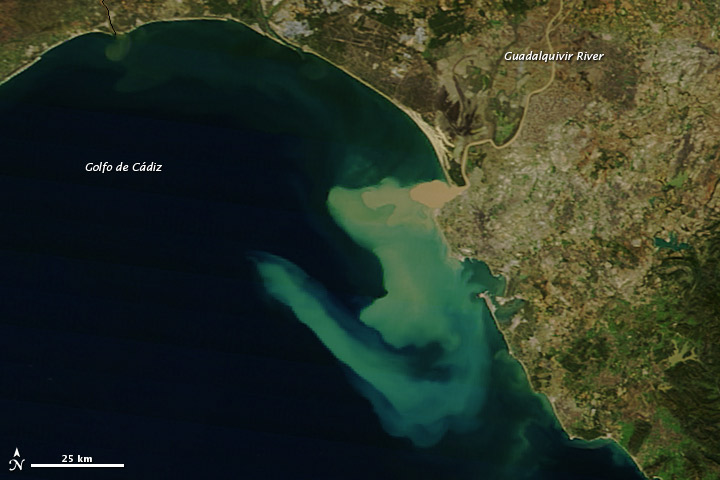 The Guadalquivir River empties into the Golfo de Cádiz (Gulf of Cádiz) along Spain’s southwestern coast. In November 2012, the river delivered a heavy load of sediment to the gulf. The Moderate Resolution Imaging Spectroradiometer (MODIS) on NASA’s Aqua satellite captured the top image on November 12, and MODIS on the Terra satellite captured the bottom image the next day. Both images are natural color.

Thick sediment gave the Guadalquivir River a tan hue, and that same color dominated the water near the river delta. The sediment appeared to disperse somewhat between November 12 and 13. Sediment does not continuously color the Golfo de Cádiz; in fact, the ocean appeared clear in a MODIS image acquired on August 14, 2012. But the Guadalquivir River prodelta—the submerged portion of the delta that lies beyond the delta front—is rich in fine-grained mud.

One would think that a sediment plume released into the ocean would simply fan out evenly in all directions, but the shape of this sediment plume is convoluted. The shape may be the result of complicated ocean currents.

A study published in 2009 examined the factors that contribute to complex currents in the Golfo de Cádiz. Situated northwest of the Strait of Gibraltar, the gulf is stirred by surface currents flowing out of the Mediterranean Sea. But the gulf slopes to a depth of 2 kilometers (1.2 miles) below sea level, and at a depth of about 200 meters, another ocean current flows in the opposite direction toward the Strait of Gibraltar. The 2009 study provided an overview of the complicated currents. The authors remarked: “The interaction of the Mediterranean Outflow with topography and the entrainment process [the incorporation of ocean water into a current] induce significant circulation in the surface layer.”

The sediments from the Guadalquivir River have attracted ongoing attention from scientists, and not just when they are visible in satellite images. On April 25, 1998, a tailings dam for a pyrite mine burst along the Guadiamar River, a tributary of the Guadalquivir. The accident released 4 million cubic meters of acidic water and 2 million cubic meters of mud, which spread downstream. Threats to water quality and wildlife health have therefore been an ongoing area of research.