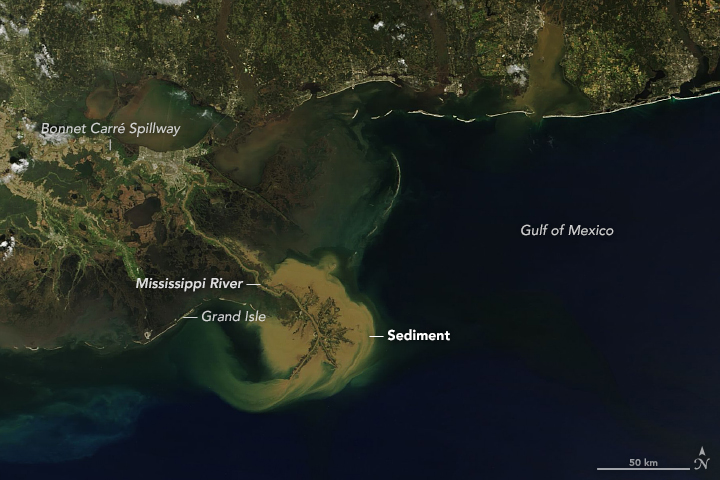 In late February 2018, a series of rainstorms pounded the central United States, causing damaging flooding along the Ohio River and parts of the Mississippi. Weeks after the storms, the effects were still being felt as far away as Louisiana. That pulse of flood water traveled down the Mississippi River and, by early March, reached the Gulf of Mexico.

On March 8, the U.S. Army Corps of Engineers opened the Bonnet Carré Spillway, which diverts excess water from the Mississippi River and relieves pressure on levees downriver in New Orleans. It marks the 12th time that the spillway has been opened since the structure was completed in the early 1930s. “This was a big event, but on the scale of big events, it’s a small one,” said Alex Kolker, an associate professor with the Louisiana Universities Marine Consortium.

Still, the flood was substantial enough to color coastal waters brown with suspended sediments. On March 4, 2018, the Moderate Resolution Imaging Spectroradiometer (MODIS) on NASA’s Terra satellite acquired this image of the sediment plume spilling into the Gulf of Mexico.

According to Nan Walker, director of Earth Scan Laboratory at Louisiana State University, sediment plumes are visible almost every spring. “The biggest floods of the Mississippi River occur on average in March or April,” she said, “depending upon the weather over the drainage basin.”

“In order to keep pace with subsidence, you need floods like this one to bring sediment to the mouth of the Mississippi,” Kolker said. “Many restoration plans revolve around diverting the flow of the Mississippi River in order to recreate systems like Bird’s Foot higher up in the river system. But you need a lot of data to make these decisions when dealing with such a large, complicated hydrological issue.”

Satellite data helps scientists understand the movement of sediment and freshwater into the Gulf. According to Kolker, MODIS is good at telling scientists how a plume gets redirected by winds and currents. It also improves the understanding of plume dynamics—that is, where fresh water, nutrients, and sediments end up.

When this image was acquired, winds were blowing out of the southeast, pushing the plume of sediment and freshwater to the northwest almost to Grand Isle. “This is the time of year when shrimp are spawning in that bay,” Kolker said. “Events like this one can impact their life cycle.” 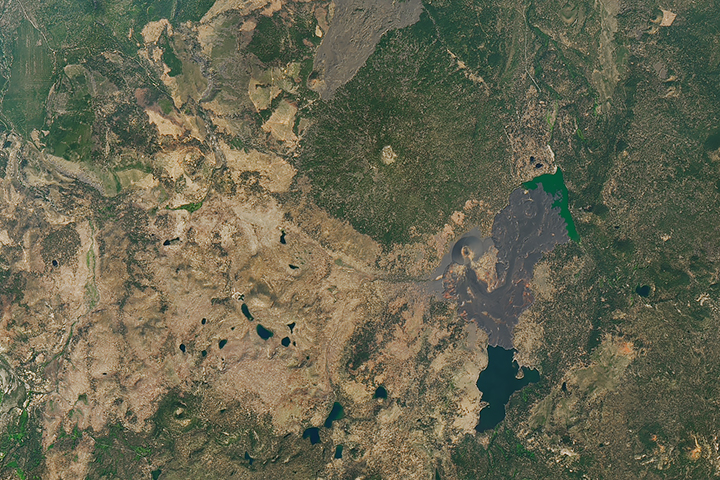