A Fateful Year at Cinder Cone 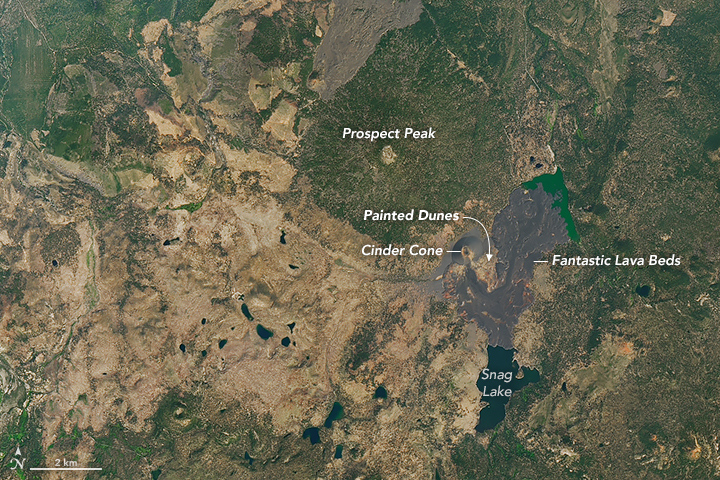 Over the course of a few months in 1666, ash and lava spewed from Cinder Cone, a 230-meter (750-foot) mound of loose rock in what is now the northeast corner of Lassen Volcanic National Park in California. The effects on the landscape were dramatic. The molten rock toppled forests and replaced them with dark, porous igneous rock. When lava crossed paths with a small creek a few kilometers southeast of Cinder Cone, it blocked the flow and created Snag Lake. Water from the lake now seeps beneath the natural dam and flows north toward Butte Lake, the remnant of a larger lake that was partly filled with lava during the same eruption.

The Operational Land Imager (OLI) on Landsat 8 captured this image of Cinder Cone, the Fantastic Lava Beds, and the two lakes on September 27, 2017. Cinder Cone is made of scoria, a type of igneous rock with many bubble-like cavities known as vesicles. Notice the tinges of red on the lava beds immediately south of Cinder Cone; these fields of pumice, known as Painted Dunes, are brightly colored because a layer of ash fell on lava during the eruption and quickly oxidized. The photograph below, taken from Cinder Cone, shows the vivid colors of Painted Dunes. 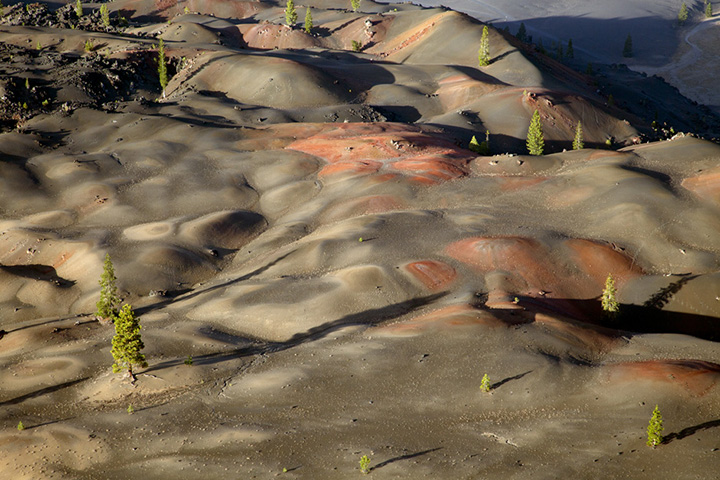 Geologists have mapped five flows that contributed to Fantastic Lava Beds. The flow that created Painted Dunes was among the first, and a narrower, U-shaped flow that curves toward Butte Lake was one of the last. Ponderosa pine forests (green) surround Cinder Cone and the lava beds.

Nearby trees were used to determine the timing of the Cinder Cone eruption. Early observers thought the lava flows were less than 25 years old because of how fresh and unweathered the rock appeared. More recent research by U.S. Geological Survey scientists has proven that the eruption happened hundreds of years earlier. Carbon dating of a quaking aspen stump showed the lava flows occurred between 1630 and 1670, and rings from multiple jeffrey pine trees point to 1666 as the precise year of the eruption.

A 1666 eruption in what is now the northeast corner of Lassen Volcanic National Park flattened forests and created a new lake.