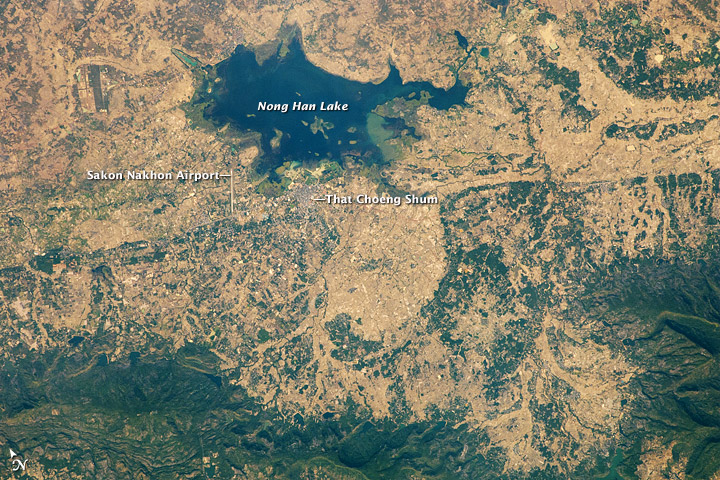 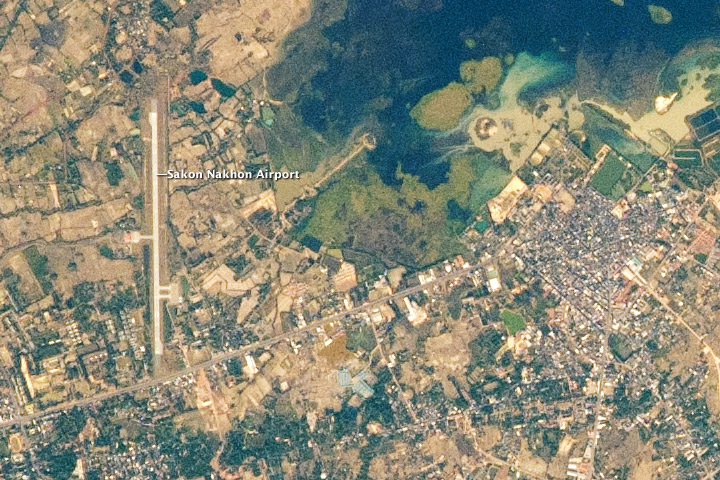 There are many types of viewing ports on the International Space Station (ISS), ranging from simple portholes to optically sophisticated windows requiring special procedures for use. These windows help astronauts see Soyuz and Progress spacecraft and space shuttles approaching for intricate docking maneuvers. They offer a view of what the ISS manipulator arm is doing as it moves tools and people outside. They allow the crew to orient themselves—spatially and emotionally—to the Earth, the Moon, and the stars.

The ISS portholes and windows also provide a vital tool for studying our planet. With that in mind, NASA recently improved the view, as displayed in this photograph and enlargement (lower image) of That Choeng Shum, Thailand. Taken on January 21, 2011, the image demonstrates the crisp, detailed photos that can now be taken from the Destiny Laboratory. Note the faint outline of the stripes (about 6 meters wide) on the runway at the Sakon Hakhon airport.

The Destiny Laboratory has an observation window with the highest quality optics ever flown on a human occupied spacecraft. But until this year, astronauts had to hold cameras by hand and shoot through a protective, non-optical â€œscratch paneâ€ that often blurred images (the intent was to keep the window from being scratched). In April 2010, Space Shuttle Discovery delivered the Window Observational Research Facility (WORF), a stable mounting platform that holds cameras and sensors while providing power, command, data, and cooling connections. With the installation of the WORF, the ISS crew was able to remove the scratch pane for a clearer picture.

The optics of the nadir-viewing windowâ€”looking â€œstraight downâ€ on the Earthâ€”are now fully available for the first time since Destiny was launched in 2001. The combination of the clearer Destiny window and the WORF platform adds to the space station’s capabilities for Earth science. It enables the operation of high-resolution cameras and multi- or hyperspectral imagers from within the pressurized safety of the ISS.

“The clarity and level of detail is captivating,” said Brion Au, a payload developer for EarthKAM, an educational outreach project that allows middle school students to remotely take pictures of Earth. “Never before in the history of EarthKAM have images of this quality been possible.”

Read more about the WORF and EarthKAM in our new feature: “We Can See Clearly Now.”