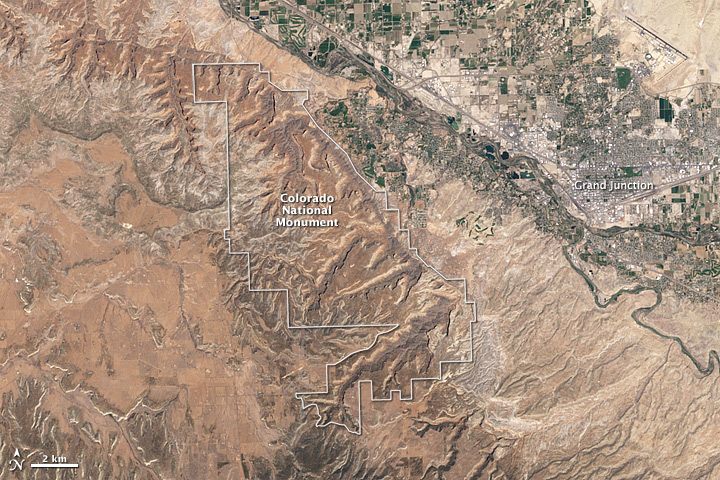 Along the Interstate 70 corridor in western Colorado, well-watered croplands, residential properties, and urbanized areas create a broad stripe of green and gray. Away from the interstate, dry climate conditions color the landscape shades of beige, brick, and tan. Yet these arid regions offer treasures of their own, including stunning vistas and wildlife both living and extinct.

West of Grand Junction lies Colorado National Monument, a network of canyons and mesas. The Enhanced Thematic Mapper on NASA’s Landsat 7 satellite captured this natural-color image of the area on April 2, 2002. Outlined in white, the monument includes a combination of sunlit and shady canyon walls and floors—an area of varied elevation next to a broad valley.

Colorado National Monument lies along the margin of the Uncompahgre Uplift, once a part of the Ancestral Rocky Mountains, which formed some 300 million years ago. The rock layers of the Monument are part of the Colorado Plateau—a high-elevation region spanning parts of Utah, Colorado, New Mexico, and Arizona. Other geological wonders of the Plateau include the Grand Canyon, Bryce Canyon, and Arches National Park.

The varied landscapes of Colorado National Monument show the effects of tens of millions of years of erosion. Wind and rain have sculpted dramatic outcrops, such as those of the Devil’s Kitchen. Weathering has also produced potholes, though unlike the annoying asphalt variety, these are natural sandstone basins that collect rainwater and sediment, and provide homes to plants and animals. And the region contains fossil discoveries, including tracks left by ancient dinosaurs, turtles, and lizards.

Developed areas extend all the way to the border of the national monument. According to the National Park Service, the local population has doubled since 1970. While the increased population has enabled more people to enjoy the monument, it has also created challenges. Increased use of the area for recreation has increased traffic, and developments now lie in the path of flash floods and wildlife migrations.