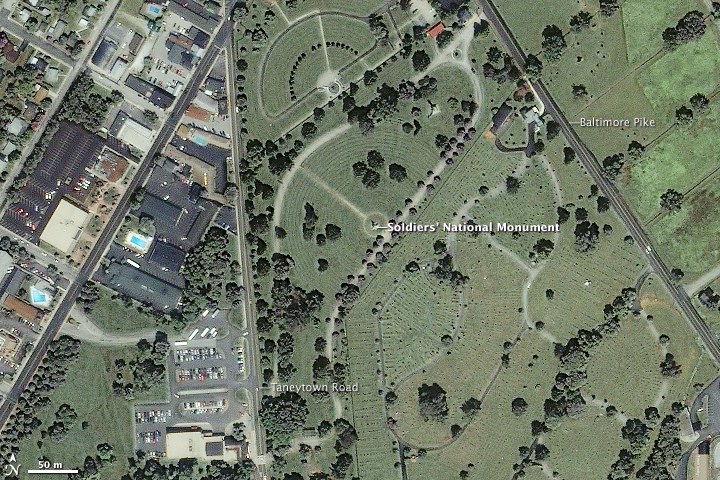 U.S. National Parks are not always chosen for their spectacular scenery, their undisturbed wilderness, or their recreational value. Some parks are created to preserve important parts of American history. Such is the case with Gettysburg National Military Park in south-central Pennsylvania, which preserves buildings, artifacts, battlefields, and graves associated with the deadliest battle of the American Civil War: the Battle of Gettysburg, which took the lives of more than 8,000 soldiers in early July 1863.

This high-resolution image shows the Soldiers’ National Cemetery in Gettysburg National Park. The image was captured by the commercial Ikonos satellite on June 25, 2003, almost 140 years after the battle. It was in this cemetery that President Abraham Lincoln gave his famous “Gettysburg Address” during the cemetery’s dedication ceremony in November 1863.

The modern view of the cemetery, with its smooth green lawns, carefully laid grave markers, and tree-lined paths, is not what Lincoln would have seen when he looked out over the rolling, wooded hills on the day of his address. Only a fraction of the thousands of fallen soldiers had been removed from their shallow battlefield graves and re-interred at the cemetery by then. The cemetery’s most prominent monument, located near the center of this scene, would not be erected until 1869.

The circle of graves surrounding this monument are those of Union soldiers who died at Gettysburg, while the smaller semi-circle of graves to the north is an expansion that was added to bury veterans from later wars, including the Spanish-American War and World War I.