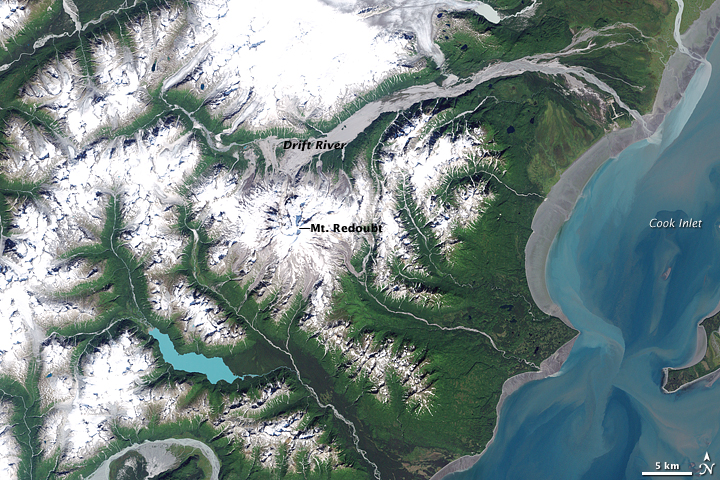 The glacier-covered Redoubt Volcano is one of many that line Alaska’s southern shores. Located 177 kilometers (110 miles) southwest of Anchorage, Redoubt is one of the peaks in the scenic Chigmit Mountain Range that frames the western side of Cook Inlet in Lake Clark National Park and Preserve. Redoubt is also one of the most active of the Cook Inlet volcanoes. It last erupted in 1989 and 1990, sending a plume of ash into the atmosphere large enough to interfere with air traffic. At the time, the eruption was one of the costliest eruptions in U.S. history, said Joel Hard, superintendent of Lake Clark National Park and Preserve. In late January 2009, the volcano started to rumble once again.

This image, taken by the Landsat satellite on August 16, 2000, illustrates some of the potential hazards associated with an eruption. Even in late summer, the volcano was covered in snow. As hot gases and lava erupt from the volcano, the snow will melt, possibly sending floods of water and debris down the mountain. These volcanic floods are called lahars, and a lahar from Redoubt would likely travel down the Drift River, which drains the volcano on the north. The volcanic flood could reach Cook Inlet, shown on the right side of the image. Such flooding on the Drift River is not unprecedented. Snow and ice melt during the eruption of 1989-90 created dramatic flooding on the nearby Drift River, which interrupted work at the Drift River Oil Terminal, Hard told NASA Earth Science Video Producer Jefferson Beck.

Apart from causing floods, lahars can leave a permanent mark on the landscape. About 3,500 years ago, a large lahar, thick with clay, and an avalanche of volcanic debris dammed the Crescent River to form Lake Crescent, the pale blue lake southwest of the volcano.

The Alaska Volcano Observatory did not expect a lahar or eruption large enough to cause the type of change that formed Lake Crescent. In early February, the volcano continued to shake while the world watched and waited to see what kind of eruption, if any, would occur. Lake Clark National Park and Preserve is prepared for the eruption, said Hard. “When you live in close proximity to two volcanoes—we have two that dominate the landscape—you just kind of get used to it,” he said. “It will do what it’s going to do and we’ll all adjust.”