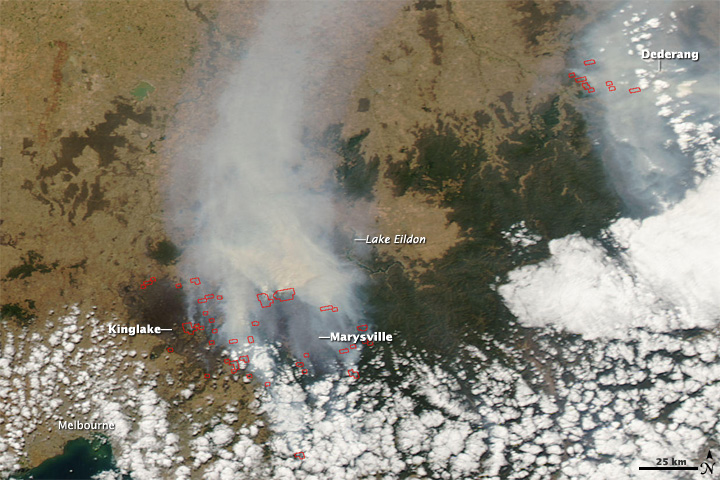 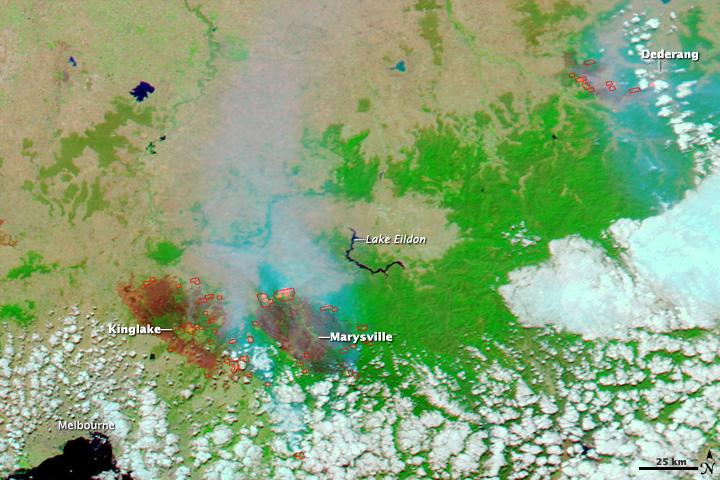 Bushfires in southeastern Australia turned deadly over the first weekend of February 2009. Out-of-control fires raced into small communities and towns in Victoria, and more than 100 people had died as of February 9, according to news reports. The Australian Broadcasting Corporation (ABC News) reported that many of those who died had remained to protect their homes. Among the most devastated communities were those in the Kinglake area and Marysville. As of February 9, firefighters were expressing concern about the increased activity of the fire around the town of Dederang, southwest of Lake Hume.

This pair of images shows the Barry Mountains of central Victoria on February 9, 2009. The image at top is a natural-color (photo-like) view captured by the Moderate Resolution Imaging Spectroradiometer (MODIS) on NASA’s Aqua satellite. Places where the sensor detected active fire are outlined in red. The lower image is the same scene shown in false color, using visible, near-infrared, and shortwave infrared light. Burned areas are brick red, and places of intense heat—often a sign of open flame in this kind of image—are glowing pink. Smoke turns a transparent blue, which makes it easier to see the ground.

Fire is a regular occurrence in the forests and grasslands of southeastern Australia, even in the absence of people. In the hot, dry summer months, vegetation dries out; lightning triggers many natural wildfires. However, in the past decade, the area has experienced several severe droughts, and in late January and early February, parts of South Australia, Victoria, and New South Wales were also paralyzed by an exceptional heatwave. Conditions were primed for devastating fires, some of which appear to have been started by lighting and others, according to news reports, by arson. The event was the worst fire disaster in Australia’s history.

Numerous fire "hotspots" were detected in natural- and false-color images of southeastern Australia on February 9, 2009.