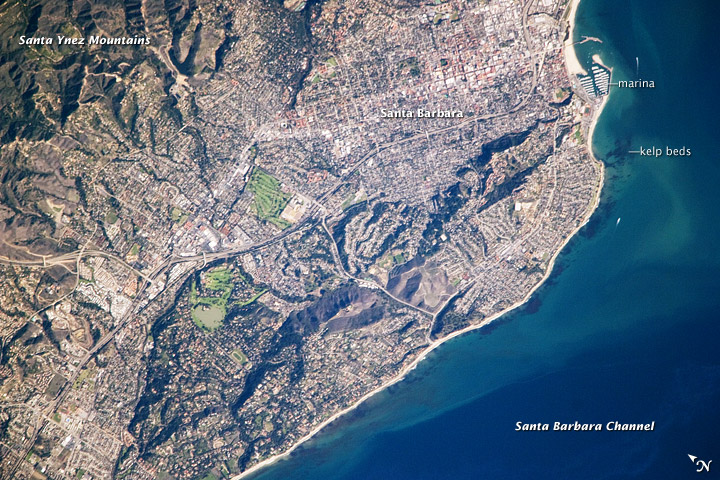 This detailed astronaut photograph highlights the Santa Barbara, California, metropolitan area, sometimes called the “American Riviera.” The geographic setting of the city—between the Santa Barbara Channel to the south and the steep Santa Ynez Mountains to the north—and its year-round mild climate evoke the Mediterranean Riviera. The city was officially founded as a Spanish mission in 1786, and it was incorporated into the United States from Mexico in 1848 following the Mexican-American War.

The dramatic landscape of the city is the result of tectonic forces; the Santa Barbara Channel is part of the boundary between the oceanic Pacific Plate and the continental North American Plate. Movement along the San Andreas Fault—the actual zone of contact between the two plates—over geologic time both raised the Santa Ynez range and lowered the seafloor, forming the deep Santa Barbara Channel. The city has experienced two earthquakes, one in 1812 and another in 1925, that caused significant damage.

Astronaut photograph ISS018-E-11096 was acquired on December 6, 2008, with a Nikon D2Xs digital camera fitted with an 800 mm lens. It is provided by the ISS Crew Earth Observations experiment and the Image Science & Analysis Laboratory, Johnson Space Center. The image was taken by the Expedition 18 crew. The image in this article has been cropped and enhanced to improve contrast. Lens artifacts have been removed. The International Space Station Program supports the laboratory to help astronauts take pictures of Earth that will be of the greatest value to scientists and the public, and to make those images freely available on the Internet. Additional images taken by astronauts and cosmonauts can be viewed at the NASA/JSC Gateway to Astronaut Photography of Earth. Caption by William L. Stefanov, NASA-JSC.

After sunset the borders of "The City of Angels" are defined as much by its dark terrain features as by its well-lit grid of streets and freeways.