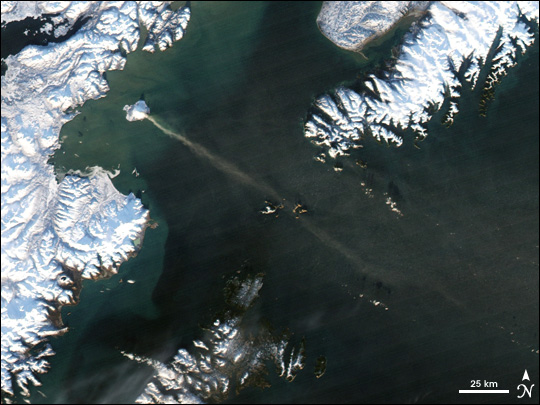 On December 12, 2005, a plume of volcanic gas and steam billowed from Augustine Volcano in the Gulf of Alaska and spread approximately 80 kilometers (50 miles) toward the southeast. The Moderate Resolution Imaging Spectroradiometer (MODIS) flying onboard the Aqua satellite captured this image the same day. In this image, the volcanic plume streams from the tiny, snow-capped volcanic island and dissipates over the ocean.

Augustine Volcano is closely monitored using geodetic equipment that records ground movement, and the volcano had shown seismic activity earlier in December 2005. Authorities had raised its alert level to yellow, or “restless” before the emission of the plume. As activity ramped up in early December, researchers at the Alaska Volcano Observatory made a live view of the volcano available on the Web.

Augustine Volcano is regarded as the most active volcano in the eastern Aleutian arc. Its biggest historical eruption occurred in 1883 when the volcano’s dome collapsed. Dome growth since that time has restored the volcano’s height to what it was prior to 1883. The volcano erupted again in 1986, producing an avalanche of ash, rock fragments, and gas. Augustine’s activity reaches much further back in time than historical records cover. Its oldest dated volcanic rocks are more than 40,000 years old.