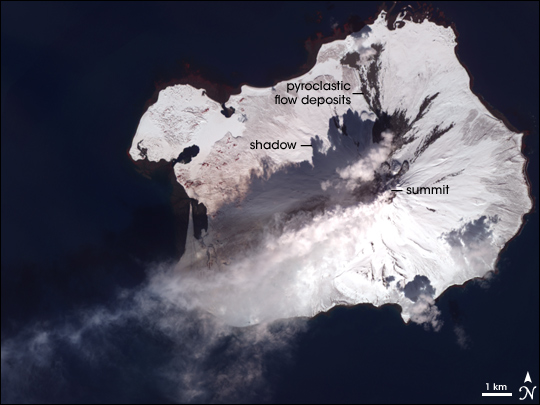 The Advanced Spaceborne Thermal Emission and Reflection Radiometer (ASTER) on NASA ’s Terra satellite captured this image on April 18, 2006. According to the AVO, Augustine’s seismic activity jumped that day. The volcano continued its customary steam plume, and light winds allowed the plume to rise directly above the summit about 300 to 600 meters (1,000 to 2,000 feet). This image shows the steam plume flowing from the summit in the south. The cloudy form to the north could be cloud, or a steam plume from the volcano’s pyroclastic flow deposits—hot rock fragments and ash.

Augustine Volcano is considered the most active volcano in the eastern Aleutian arc. Its biggest historical eruption occurred in 1883 when the volcano’s dome collapsed. The volcano erupted again in 1986, producing an avalanche of ash, rock fragments, and gas. Augustine’s activity spans a longer time span than historical records cover, and its oldest dated volcanic rocks are more than 40,000 years old.