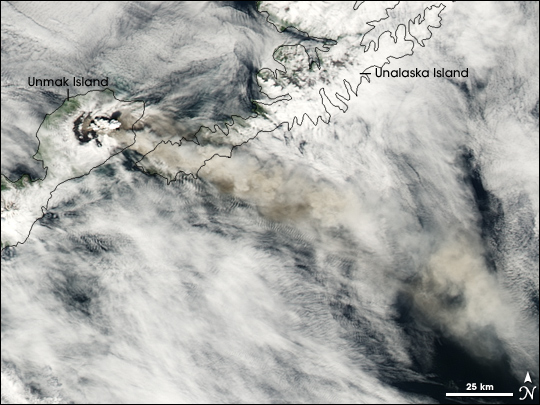 Okmok Volcano, which initially erupted on July 12, 2008, remained active as the month progressed. The Moderate Resolution Imaging Spectroradiometer (MODIS) on NASA’s Aqua satellite took this picture on July 23, 2008, as the volcano released a plume of ash and steam. In this image, the plume can easily be spotted, despite local cloud cover. In contrast to the clouds, the plume appears beige in color, and blows toward the east-southeast. A close look at the summit reveals opaque white puffs of vapor casting dark shadows to the north.

According to the Alaska Volcano Observatory (AVO), Okmok’s activity on June 23 consisted of continuous, mid-level volcanic tremors. The AVO warned that strong explosive eruptions, which had occurred days earlier, could resume at any time.

Okmok is a shield volcano with a low, broad shape that resembles an ancient warrior shield. The volcano comprises the northeast end of Umnak Island in Alaska’s Aleutian Islands.

You can download a 250-meter-resolution KMZ file of the volcano and its plume suitable for use with Google Earth.