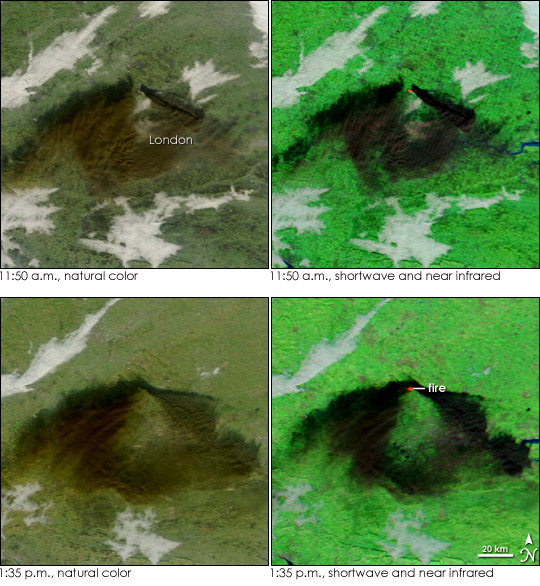 Sunday, December 11, 2005, was a day without sun for many Londoners. At about 6 a.m. local time, an explosion rocked a fuel depot in Hertfordshire, approximately 40 kilometers (25 miles) north of London. The ensuing oil fire sent thick clouds of sun-blocking black smoke billowing over London and South England. By 11:50 a.m., when the Moderate Resolution Imaging Spectroradiometer (MODIS) flew over on NASA’s Terra satellite, the smoke had fanned south over tens of kilometers. London, normally a large cement-colored circle on the landscape, was not even visible beneath the smoke. Nearly three hours later when Aqua MODIS flew over, the fire was still burning, and the smoke had spread still farther. By December 12, the smoke had thinned to a single plume.

The extent of the smoke is easier to see in the false-color images, right, which were created using light from the shortwave and near-infrared part of the electromagnetic spectrum. In these images, the dark smoke stands out clearly against the brilliant green of the plant-covered land. At the source of the smoke, the intense heat of the fire glows in the infrared. According to news reports, the fire was the largest of its kind ever seen in Europe.

British health officials advised those living under the smoke plume to remain indoors. The smoke contains small particles, soot, that may cause irritation when inhaled, but no long-term health effects were expected. The smoke also contains gases like carbon monoxide, carbon dioxide, and sulphur dioxide. For more information about the health impacts of the smoke, see the Health Protection Agency web site.

The large images provided above are at MODIS’ maximum resolution of 250 meters per pixel. Daily images of the region are available from the MODIS Rapid Response Team in a variety of resolutions.

An explosion at a petrol depot in southern England sent thick black clouds of smoke billowing over London on December 11, 2005.