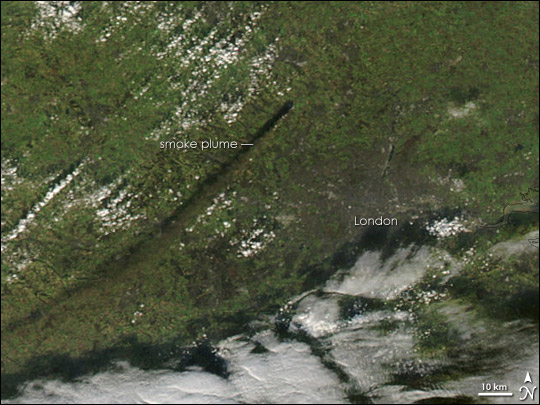 The billowing clouds of black smoke that choked southern England on December 11, 2005, had diminished to a single dark plume by December 12. The smoke is coming from a fire at a petrol depot following a series of explosions, the cause of which was still unknown on December 12. The fire was the largest industrial fire in Europe to date.

The Moderate Resolution Imaging Spectroradiometer (MODIS) on NASA’s Aqua satellite captured this image at 12:40 p.m. local time on December 12, 2005. The dark plume of smoke that blows southwest from the fire blends with the green and tan of the underlying landscape. It is easiest to see from the shadow it casts on the ground. Skies over the London metropolitan area, the cement-grey area southeast of the fire, are clear, an improvement from December 11 when the smoke entirely obscured the city from view. The smoke contains small particles, soot, and may cause irritation when inhaled. For this reason, British health officials have advised people near the blast to remain indoors. The smoke also contains gases like carbon monoxide, carbon dioxide, and sulphur dioxide. For more information about the health impacts of the smoke, see the Health Protection Agency web site.

The large image provided above is at MODIS’ maximum resolution of 250 meters per pixel. It is available in additional resolutions from the MODIS Rapid Response Team.

An explosion at a petrol depot in southern England sent thick black clouds of smoke billowing over London on December 11, 2005.