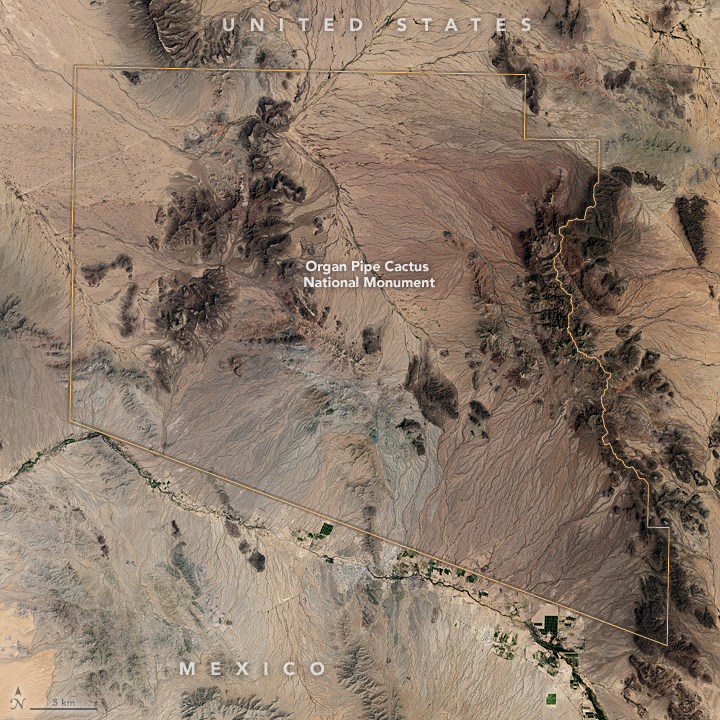 Organ pipes dot the desert floor in southern Arizona. These tall, branch-like formations of cacti lend unusual beauty to Organ Pipe Cactus National Monument, while also sheltering its inhabitants. This federal monument is the only place in the United States with large stands of the organ pipe cactus. They abound on southern-facing slopes, and can live for more than 150 years, according to the National Park Service. The cacti do not produce their first flowers for roughly 35 years.

The Operational Land Imager (OLI) on the Landsat 8 satellite acquired this image of Organ Pipe Cactus National Monument on August 29, 2016. From space, the park appears to be an arid landscape of braided streams and rocky outcroppings. It includes more than 500 square miles (1330 square kilometers) of land—mostly scraggly hills and vegetation.

On the desert floor, small desert animals scamper around the cacti. The park comes alive at night when the kangaroo rat—a critter that resembles a mouse—scavenges for seeds. Nearby, the javelina (“musk hog”) uses its tusks to sever a prickly pear cactus. Above, lesser long-nosed bats feed off the sweet pulp of night-blooming saguaro flowers. Thousands of them fly here from their winter homes in Mexico each year.

In its cowboy years, the monument was a very different place. More than 1,700 cattle roamed the desert hills as recently as the 1960s. The grazing permits were revoked, and the last of the animals left the monument in 1972, according to the National Park Service. Today, old roads still lead to abandoned wells and ranch structures. The wild grasses and small cacti—once trod over by cattle—continue to recover.