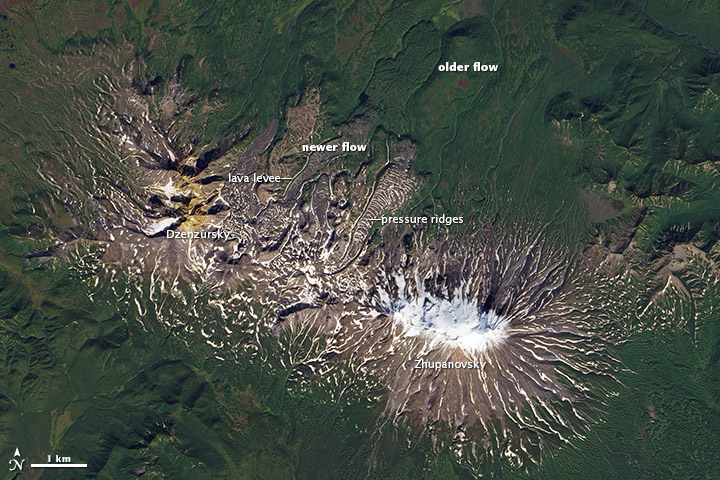 Read part 1 of this story to see an example of a lava dome created by highly viscous lava.

Streams of molten rock that ooze from gaps or vents in the Earth’s surface are called lava flows, and they can pose a hazard to everything in their paths. These rivers of rock can take many shapes and move at very different rates depending on the viscosity of the magma, the slope of the land, and the rate of an eruption.

While viscous lava flows are defined by steep flow fronts and pressure ridges, low-viscosity lavas tend to move faster and create longer, narrower shapes. They also tend to have smaller flow fronts and levee-like structure along their edges. Many characteristics of a low-viscosity lava flow are visible in this image of Zhupanovsky and Dzenzursky volcanoes on Russia’s Kamchatka Peninsula. The image was acquired by the Operational Land Imager (OLI) on the Landsat 8 satellite on September 9, 2013.

In the image, younger lava flows appear grey, while older flows are covered by green vegetation. The exact ages of the flows are unclear, but the eruptions that produced them likely occurred during the past few thousand years. Distinctive lava levees are visible along the edges of many of the younger flows. These features form as lava cools and hardens along the edges or top of a flow while the center of a flow still advances.

In comparison to the Chao dacite in Chile (the product of viscous lava), the flows at Zhupanovsky and Dzenzursky are much narrower and longer. They have smaller flow fronts (10 to 30 meters tall) in comparison to the sheer 400-meter cliffs at Chao, as well as more prominent lava levees along the edges. Like Chao, the flows shown above have pressure ridges caused by the compression of the cooling top of the lava as the flow advanced. 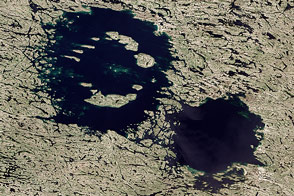