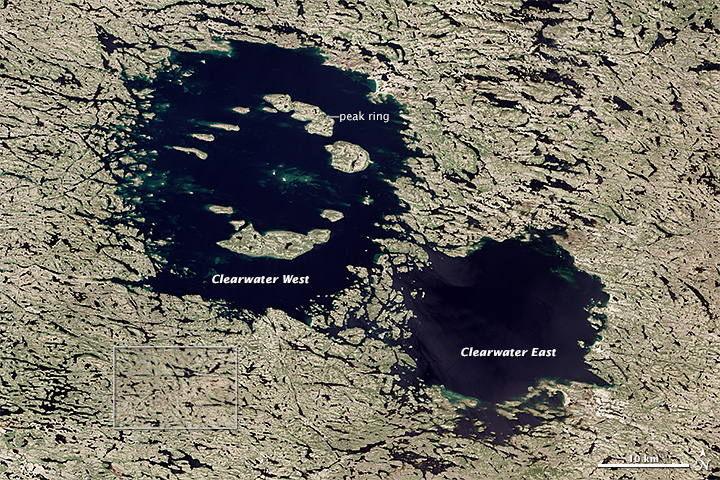 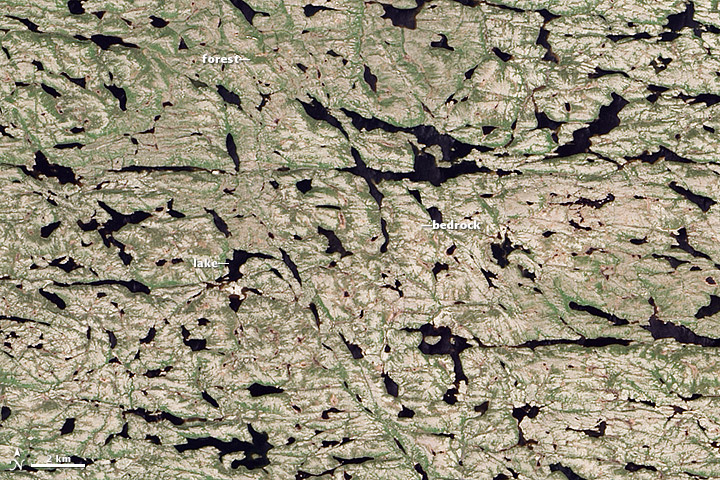 About 290 million years ago, two large asteroids smashed into Earth. The massive craters they left behind—now lakes—are still visible from space. Astronauts have noticed and photographed the craters for decades, and the Operational Land Imager on Landsat 8 captured a new image of Clearwater Lakes (Lac à l‘Eau Claire) on June 29, 2013. The small inset box toward the lower left marks the area shown in the lower image.

When they struck, the binary asteroids crashed into a part of Earth’s crust that was fairly close to the equator. Since then, millions of years of plate tectonics have pushed the craters north into what is now northwestern Quebec. A mere 20,000 years ago (not long from a geologic perspective), massive sheets of ice covered northwestern Quebec, much like ice now covers Antarctica and Greenland. During that period, ice sheets repeatedly advanced and retreated, scouring the land of soil and rock during cool periods, and then carving deep channels and rinsing the landscape with melt water during warmer periods.

In the images above, the impact of that glacial scouring is evident. The area has little topsoil and supports only sparse vegetation such as spruce forests, grasses, and mosses. The erosion was so complete that many land surfaces were scraped down to underlying bedrock, exposing some of the oldest rocks in the world. Meanwhile, the melt water from retreating glaciers left a dense network of linear lakes and streams that now dominate the surface. Their ubiquity and complexity is a sign that the geologically young drainage network has yet to carve out its most efficient route to the sea.

While simple craters have a circular, bowl-shaped form, large asteroids leave more complex shapes. Clearwater East and Clearwater West, for instance, are both complex craters with distinct central peaks. These peaks are caused by the gravitational collapse of crater walls and subsequent rebound of the compressed crater floor. Lake water covers the central peak of Clearwater East, but bathymetric surveys of the lake floor confirm the presence of a peak in its center.

The central peak on Clearwater West went through another geologic twist. The central peak became so tall that it collapsed, producing a feature known as a peak ring. The top of the peak ring rises well above the modern water line, leaving the ring of islands seen above.

Two asteroids crashed into Earth in the Carboniferous Period, leaving this distinctive pair of craters in northwestern Quebec.