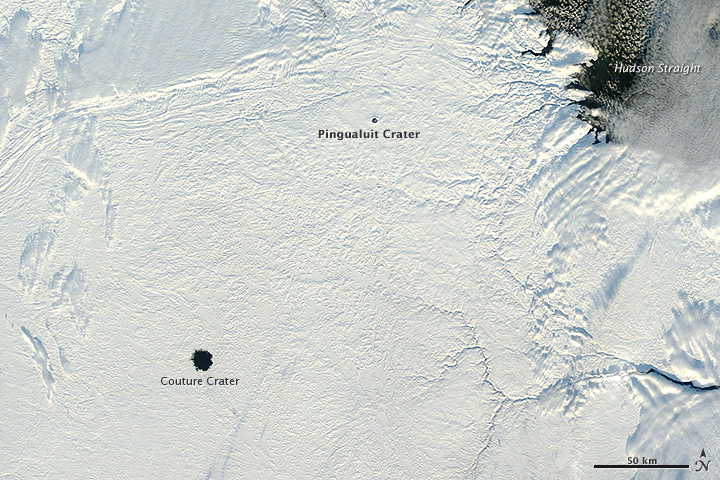 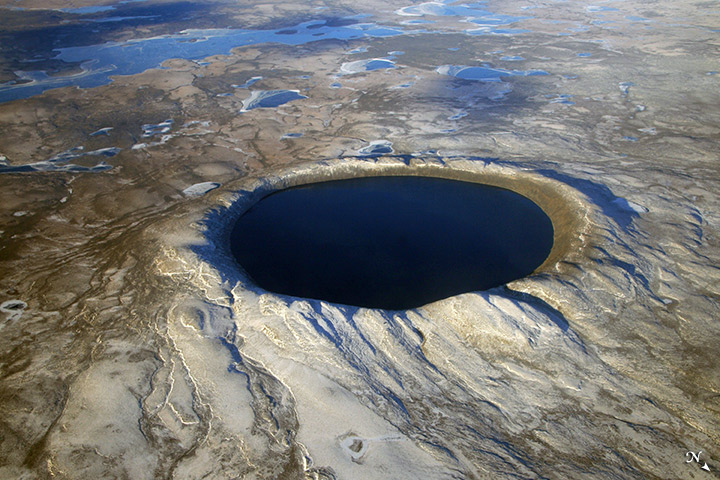 When NASA’s Terra satellite passed over northern Quebec on November 25, 2012, winter snow and ice had transformed the pockmarked landscape of Ungava Peninsula into a seemingly endless expanse of white. However, two areas—both near-perfect circles—remained stubbornly free of ice. Those ice-free areas, seen in the top image above, are Pingualuit and Couture craters. The lower image shows just Pingualuit as seen from an airplane on October 12, 2007.

Both craters were formed millions of years ago by meteorites striking the surface, and today they hold deep lakes. Couture is approximately 8 kilometers (5 miles) wide and has a water depth of 150 meters (490 feet); Pingualuit’s lake is about 3 kilometers (2 miles) across and has a depth of 246 meters (807 feet).

“The crater lakes hold such huge volumes of water in comparison to the surrounding glacial lakes that they’re slower to respond to temperature changes,” explained Reinhard Pienitz, a fresh water lake expert who recently led an expedition to Pingualuit to collect sediment cores. “Pingualuit Crater Lake is always the last to freeze in the winter and the last to melt in the spring.”

Still, Pienitz found it surprising that the crater lakes were ice-free so late in November. Pingualuit usually has open water for just six-to-eight weeks in August and September. Pienitz suspects the unseasonably warm summer has played a role in keeping the lakes ice-free so late this year.

Hot summer temperatures in the Arctic made headlines when satellites observed widespread melting across Greenland in July 2012. Meteorological records from Environment Canada show that average temperatures at weather stations near the lakes have been above normal for every month since July.

Temperature isn’t the only factor that influences when the lakes freeze. Wind-driven mixing and late-season overturning of the water column probably also helped keep the two crater lakes free of ice longer than others in the area. During the short open water periods, the lake’s water column is slightly warmer at the top than at the bottom. When the lake freezes, the situation reverses such that the warmest water is at the bottom of the lake.

“This means the whole water column turns over during the end of the open water season—a process that is exacerbated by strong descending westerly wind gusts that cross the rim and plunge into the crater during the fall,” explained Pienitz. “This mixing in the fall and early winter likely contributes to Pingualuit’s enormous thermal inertia and helps keep waters above the freezing temperature.”