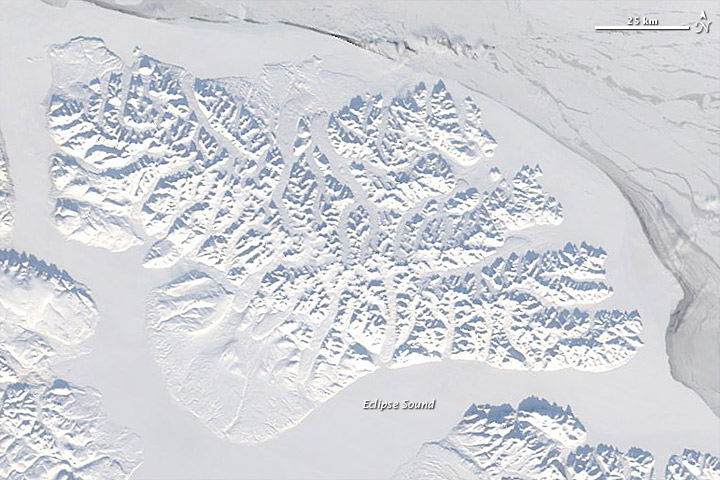 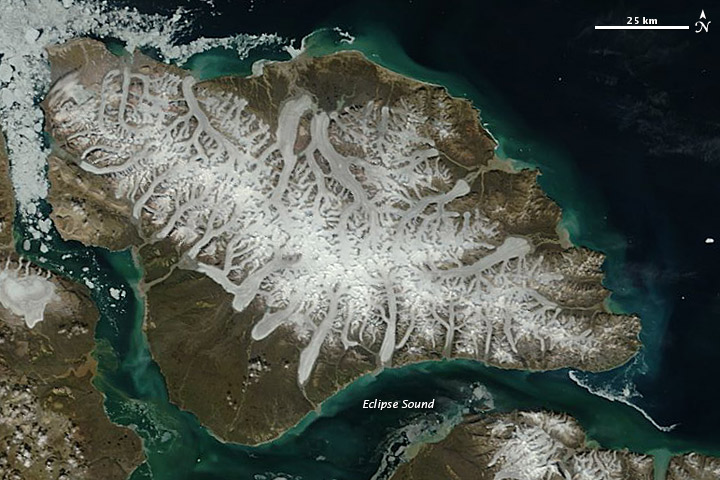 The mountains on Bylot are part of the Arctic Cordillera that stretches from Baffin Island to Ellesmere Island. The mountains cast longer shadows in the winter, thanks to the low angle of the Sun. That play of sunlight and mountains also illuminates (or leaves in shadow) glacier fronts in Bylot’s valleys. But the glaciers are much easier to spot in the summertime, stretching north or south from the mountainous spine.

Bylot Island has had a long acquaintance with glaciers. The Laurentide Ice Sheet once scoured the island, but it began to retreat sometime between 8,000 and 6,000 years ago. Multiple glaciers remained in the ice sheet’s wake, but they have continued changing. Photographs of the glaciers taken between the 1940s and the 2000s indicate that many are rapidly retreating.

Away from the glaciers, tundra vegetation overlies permafrost. The southern plain of the island hosts a plant habitat that is unusually rich. The plants provide food for herbivores such as lemmings, hares, and caribou, which in turn provide food for predators such as Arctic foxes and jaegers. The island’s importance to migratory birds prompted officials to declare it a sanctuary in 1965.

Seasonal changes are apparent in the waters around the island as well as on it. Arctic sea ice waxes and wanes annually. In early March 2012, sea ice filled Eclipse Sound, but in late July, only small remnants lingered.