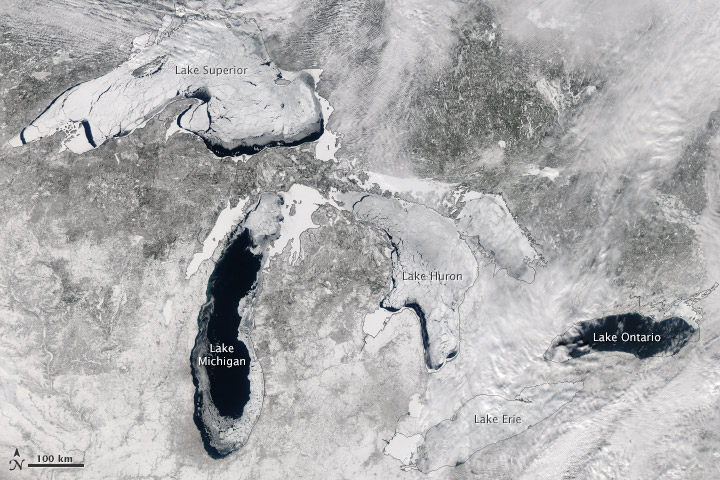 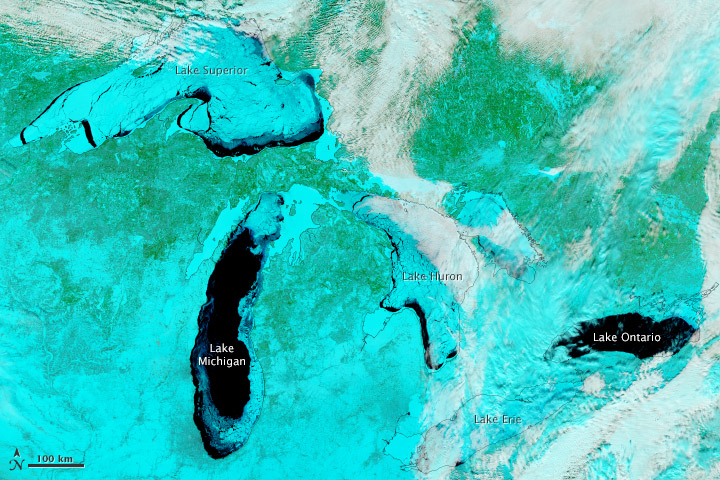 Ice cover on North America’s Great Lakes reached 88 percent in mid-February 2014—levels not observed since 1994. The average maximum ice extent since 1973 is just over 50 percent. It has surpassed 80 percent just five times in four decades. The lowest average ice extent occurred in 2002, when only 9.5 percent of the lakes froze.

The images above were acquired by the Moderate Resolution Imaging Spectroradiometer (MODIS) on NASA’s Aqua satellite on February 19, 2014. The first image shows the Great Lakes in natural color in the early afternoon, when ice covered 80.3 percent of the lakes, according to NOAA’s Great Lakes Environmental Research Laboratory. The second, false-color image uses a combination of shortwave infrared, near infrared, and red (MODIS bands 7-2-1) that helps distinguish ice from snow, water, and clouds. Ice is pale blue (thicker ice is brighter), open water is navy, snow is blue-green, and clouds are white or blue-green (depending on temperature and composition).

“Persistently low temperatures across the Great Lakes region are responsible for the increased areal coverage of the ice," said Nathan Kurtz, cryospheric scientist NASA's Goddard Space Flight Center. Cold air and winds remove heat from the fresh water until it reaches the freezing point, at which point ice begins to form on the surface. “Low temperatures are the dominant mechanism for thickening the ice, but secondary factors like clouds, snow, and wind also play a role.”

“We had an early ice season this year, owing to cold temperatures in the fall and early winter,” added George Leshkevich of NOAA’s Great Lakes lab. “Ice was reported on bays and harbors of the Great Lakes as early as the end of November, as opposed to the normal timing of mid-December.”

The natural color image below was captured by the Operational Land Imager on the Landsat 8 satellite on February 15, 2014. It shows the thick ice cover in western Lake Erie, along with shipping lanes carved by ice breakers. (The web image is a closeup drawn from this wider view of western Lake Erie and Lake St. Clair.) 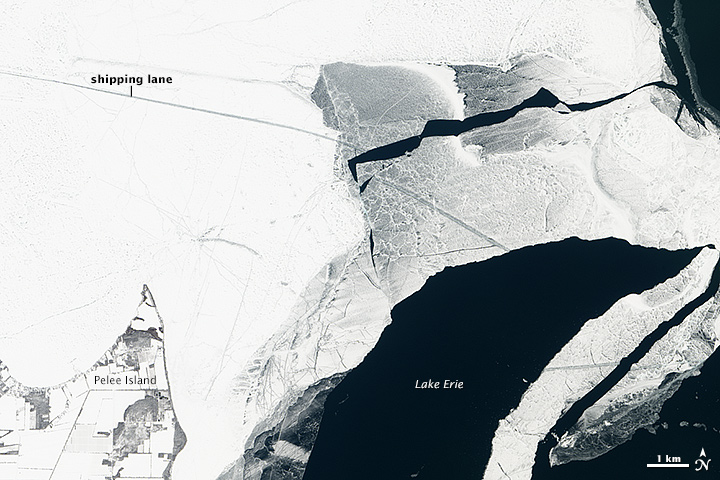 The frozen lakes have implications well beyond the water surface and the winter. Extensive ice cover on the Great Lakes can change the patterns and amounts of the famous “lake effect” snowfall in the region, explained Walt Meier, a cryospheric scientist at NASA Goddard. When the lakes are mostly ice free, cold west or north winds blow over the warmer water, pick up moisture, and then drop snow on the lee side of the lakes (usually eastern and southern shores). When the lakes freeze, the effect generally shuts down. However, the region is still receiving a fair amount of snow this winter due to other weather patterns, Meier noted.

Lake levels could be affected in the summer. Winter ice cover generally reduces evaporation during winter months. If that turns out to be the case in 2014, it would be “good news for local water supplies, as well as for shipping and recreational use,” Meier said.

A 2012 study published in the Journal of Climate by scientists from NOAA’s Great Lakes lab found that winter ice cover on Lake Superior decreased 79 percent from 1973 to 2010. The study also showed that ice cover on the lakes is highly variable and difficult to predict.

You also can view images of Great Lakes ice cover on February 15 and February 16.