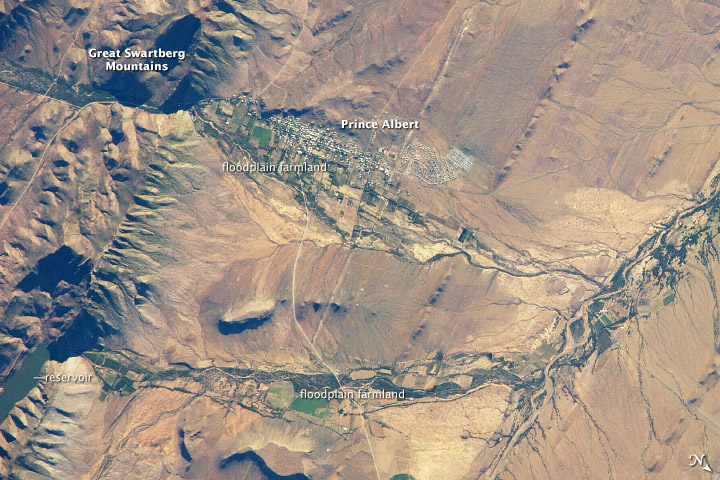 ISS crews sometimes take detailed images with an 800 millimeter lens, such as this view of the small town of Prince Albert, South Africa. The town (population about 7,000) lies about 355 kilometers (220 miles) east of Cape Town, at the foot of the mountains known as the Great Swartberg. Prince Albert, named after Queen Victoria’s husband, appears as a cluster of whitewashed buildings (image left) at the foot of the mountains, with larger dwellings nearer the steep mountain front and smaller dwellings further away.

Though Prince Albert is small and the climate is a dry, the water supply from gorges immediately upstream (a small reservoir appears on the left) have made the town well-known as a productive point in the Karoo semidesert. Olive groves and other crops flourish on the valleys floors, surrounded by sheep and ostrich ranches. Founded 250 years ago, this small town retains more than a dozen registered historic buildings in the Victorian and Cape Dutch styles. It is one of several small Karoo towns that have become getaways from South Africa’s large, crowded cities; tourism has developed significantly in the past 20 years.

Swartberg means Black Mountain in Afrikaans, and winter snow (not visible in this image) along the mountain tops makes for spectacular scenery. The mountains—standing 1,370 to 1,980 meters (4,500 to 6,500 feet) above the town—are part of the ancient Cape Fold Mountain Belt. Gorges through the mountains provide impressive side-on views of tightly folded and broken rock layers associated with the mountain-building episode.

Astronaut photograph ISS038-E-39032 was acquired on January 30, 2014, with a Nikon D3S digital camera using an 800 millimeter lens, and is provided by the ISS Crew Earth Observations Facility and the Earth Science and Remote Sensing Unit, Johnson Space Center. The image was taken by the Expedition 38 crew. It has been cropped and enhanced to improve contrast, and lens artifacts have been removed. The International Space Station Program supports the laboratory as part of the ISS National Lab to help astronauts take pictures of Earth that will be of the greatest value to scientists and the public, and to make those images freely available on the Internet. Additional images taken by astronauts and cosmonauts can be viewed at the NASA/JSC Gateway to Astronaut Photography of Earth. Caption by M. Justin Wilkinson, Jacobs at NASA-JSC. 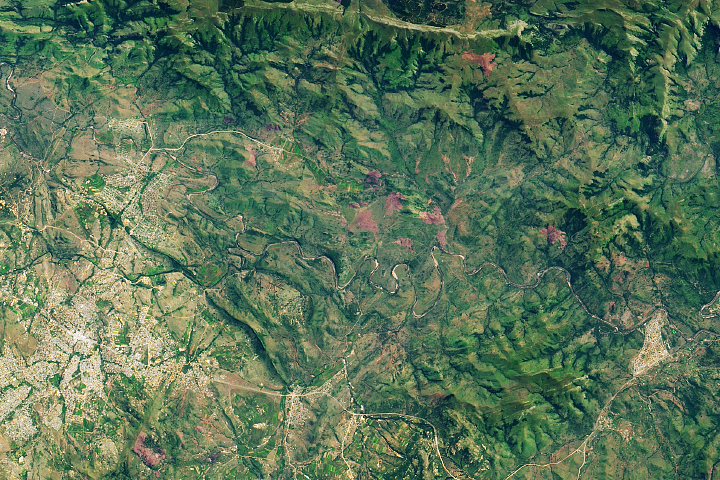