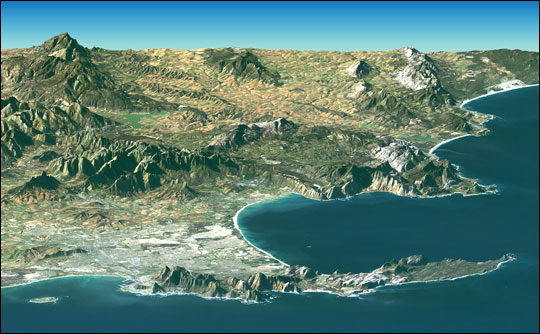 Cape Town and the Cape of Good Hope, South Africa, appear in the foreground of this perspective view generated from a Landsat satellite image and elevation data from the Shuttle Radar Topography Mission (SRTM). The city center is located at Table Bay (at the lower left), adjacent to Table Mountain, a 1,086-meter (3,563-foot) tall sandstone and granite natural landmark.

Cape Town enjoys a Mediterranean climate but must deal with the limited water supply characteristic of that climate. Until the 1890s, the city relied upon streams and springs along the base of Table Mountain, then built a small reservoir atop Table Mountain to capture and store rainfall there. Now the needs of a much larger population are met in part by much larger reservoirs such as seen here far inland (mid-distance left) at the Theewaterskloof Dam.

False Bay is the large bay to the south (right) of Cape Town, just around the Cape of Good Hope. It is one of the largest bays along the entire South African coast, but nearby Cape Town has its harbor at Table Bay. False Bay got its name because mariners approaching Cape Town from the east would see the prominent bay and falsely assume it to be the entrance to Cape Town harbor. Similarly, people often mistake the Cape of Good Hope as the southernmost point of Africa. But the southernmost point is actually Cape Agulhas, located just to the southeast (upper right) of this scene.

This Landsat and SRTM perspective view uses a 2-times vertical exaggeration to enhance topographic expression. The back edges of the data sets form a false horizon and a false sky was added. Colors of the scene were enhanced by image processing but are the natural-color band combination from the Landsat satellite.

Elevation data used in this image was acquired by the Shuttle Radar Topography Mission (SRTM) aboard the Space Shuttle Endeavour, launched on February 11, 2000. SRTM used the same radar instrument that comprised the Spaceborne Imaging Radar-C/X-Band Synthetic Aperture Radar (SIR-C/X-SAR) that flew twice on the Space Shuttle Endeavour in 1994. SRTM was designed to collect three-dimensional measurements of the Earth’s surface. To collect the 3-D data, engineers added a 60-meter-long (200-foot) mast, installed additional C-band and X-band antennas, and improved tracking and navigation devices. The mission is a cooperative project between the National Aeronautics and Space Administration (NASA), the National Geospatial-Intelligence Agency (NGA) of the U.S. Department of Defense (DoD), and the German and Italian space agencies.