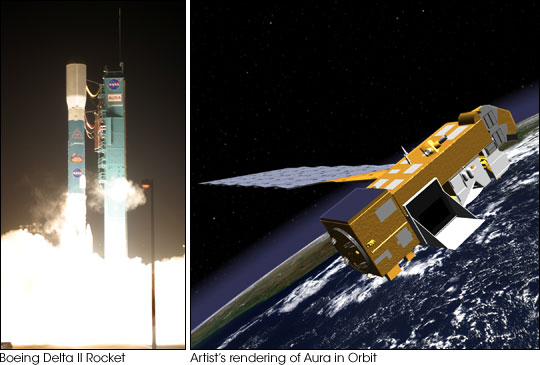 NASA launched its Aura satellite from Vandenberg Air Force Base, California, at 3:01 a.m. PDT on July 15, 2004. At 4:06 a.m. PDT, Aura was safely deployed into orbit 705 kilometers (438 miles) above Earth. The purpose of the mission is to help us better understand and protect our world’s atmosphere. Aura is the third and final of NASA’s Earth Observing System (EOS) flagships. Together with Terra and Aqua, these three missions give scientists the ability to examine our whole world every day in unprecedented detail.

Aura will help scientists answer three key questions: Is the Earth’s protective ozone layer recovering? What are the processes controlling air quality? How is the Earth’s climate changing?

Read the NASA press release for more details about the launch. For more information about the mission, visit the Aura Web site.