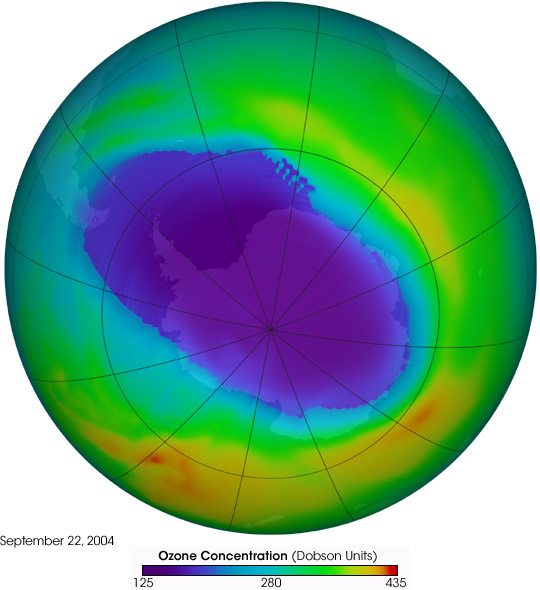 Launched on a Delta II 7920 rocket on July 15, 2004, from Vandenberg Air Force Base, California, Aura is the third and final major Earth Observing System (EOS) satellite. Aura’s view of the atmosphere and its chemistry will complement the global data already being collected by NASA’s two other EOS satellites, called Terra and Aqua. Collectively, these satellites allow scientists to study how life, land, water, and the atmosphere work together as a whole system. The Aura mission’s various instruments will enable scientists to discern subtle chemical interactions and gain better understand how the atmosphere works. Aura will also provide information to help policy makers make sound decisions about the future of our world.

The image above is the first publicly released image from the Aura mission. Acquired by the mission’s Ozone Monitoring Instrument (OMI) on September 22, 2004, the image shows dramatically depleted levels of ozone in the stratosphere over Antarctica. Purple shows areas with very low ozone concentrations (as low as 125 dobson units), while turquoise, green, and yellow show progressively higher ozone concentrations.

To learn more about the mission, please read the Aura Fact Sheet, or visit the Aura Web site.