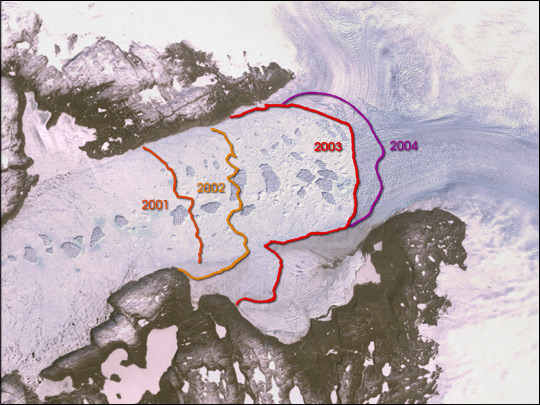 Jakobshavn Isbrae Glacier, on the west coast of Greenland, is the fastest moving glacier in the world. In recent years, scientists have discovered, it has gotten even faster. Following the steady break up of the tongue of floating ice that extended from the land out into the sea, the speed of the glacier’s flow from land to sea doubled.

Starting in late 2000, following a period of slowing down in the mid 1990s, Jakobshavn Glacier showed significant acceleration and nearly doubled its discharge of ice into the Davis Strait. Each year the terminus (the glacier’s front edge) retreated farther inland, and the colored lines on the image above mark the location of the terminus from 2001 through 2004. The image was captured by NASA’s Landsat satellite in May 2003, and the red line for that year shows where the glacier met the sea ice. The glacier is at upper right, and has a bluish-tinged, streaked appearance. The irregular, bluish shapes surrounded by whiter sea ice are icebergs that calved off the glacier and are headed out to sea. The direction of glacial flow is from upper right toward the left.

Glaciers in western Greenland are conveyor belts for icebergs. Snow that falls over land builds up year after year for centuries upon centuries, hardening under its own weight into a mass of ice. In slow motion, the ice mass grinds over the ground toward the ocean. At the terminus, icebergs calve off and float away. Based on studies of large iceberg-calving events in Antarctica in 2002, scientists discovered that mass at the terminus of the glaciers acts as a brake on the speed of glaciers as they creep toward the sea. As the calving front at the glacier’s terminus retreats, mass is lost, which has the effect of letting off the glacier’s brakes. So, as the terminus retreats, the speed of the glacier’s flow increases.

If a large mass of ice is already floating on the ocean, either as a glacial tongue or an ice sheet, then its collapse will not raise sea levels. But, as NASA and University of Colorado scientists reported at a December 2004 meeting of the American Geophysical Union (see related story), if the collapse results in increasing rates of flow and calving, the impact on sea levels could be significant. Additional results include reports on how Greenland’s large ice sheets are thinning around the edges.