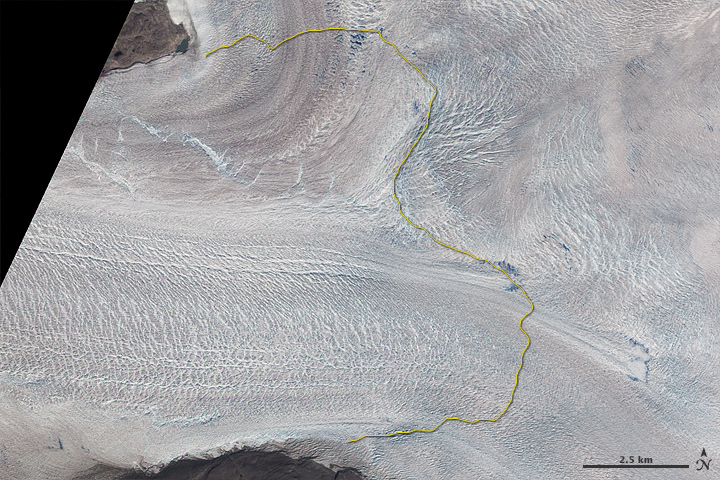 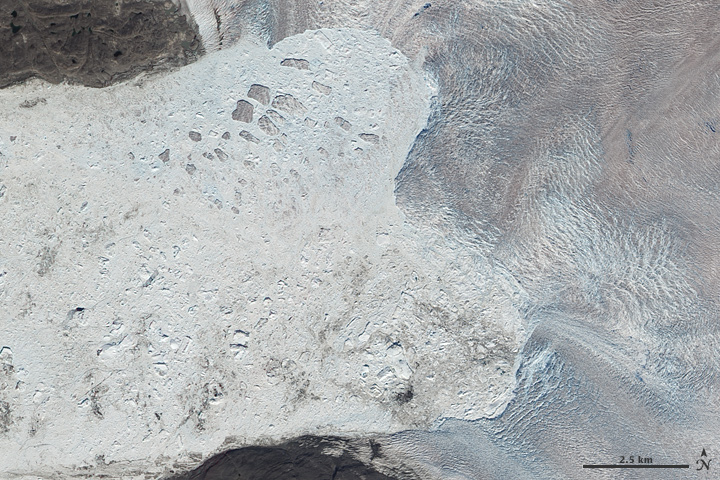 For most of the past century, the Jakobshavn Glacier, or Jakobshavn Isbræ, along the west coast of Greenland has extended out into the ocean as a long, narrow ice tongue. The glacier drains a large portion of Greenland’s ice sheet, and consequently, the glacier has the potential to contribute more to sea level rise than any other single feature in the Northern Hemisphere. On July 6–7, 2010, the glacier retreated by roughly 1 mile (1.5 kilometers). By itself, this breakup was not dramatic, but it continued a pattern of calving and retreat followed by ice flow acceleration that began nearly a decade ago.

These images acquired by the Advanced Land Imager (ALI) on NASA’s Earth Observing-1 (EO-1) satellite show Jakobshavn Glacier in 2001 (top) and 2010 (bottom). In 2001, Jakobshavn Glacier extends westward, showing typical features of a glacier, including flow stripes and crevasses. The yellow line in the 2001 image shows the part of the glacier that retreated by early July 2010. In the 2010 image, the same area is mélange—broken glacier ice and sea ice covered with snow.

In 2001, Jakobshavn was already the fastest glacier in the world, flowing from land to sea at 7 kilometers per year. By July 2010, it had accelerated to roughly 15 kilometers per year, and the leading edge had retreated nearly 10 kilometers (6 miles). The glacier withdrew inland to the region where its main two tributaries join, and for the last few years, there have been two fast-flowing glaciers where once there was one.

Warming conditions in the Arctic contribute to glacier acceleration in multiple ways. Warmer conditions can send meltwater to the glacier’s base, increasing lubrication and consequently glacier speed. During the winter, the rate of iceberg calving usually slows significantly; the glacier tongue advances, and its flow speed drops. Warm winters, however, may allow iceberg calving and high flow rates to continue.

In the winter of 2010, Jakobshavn’s ice front did not re-advance as it usually does, so it began the 2010 melt season in the same location as the 2009 summer melt season. As a result, the glacier had the potential to experience significant retreat during the summer of 2010. The breakup in early July 2010 occurred on the northern tributary to Jakobshavn Glacier. The southern tributary actually drains a larger portion of Greenland’s central ice sheet, so a retreat there could lead to a more substantial ice discharge.