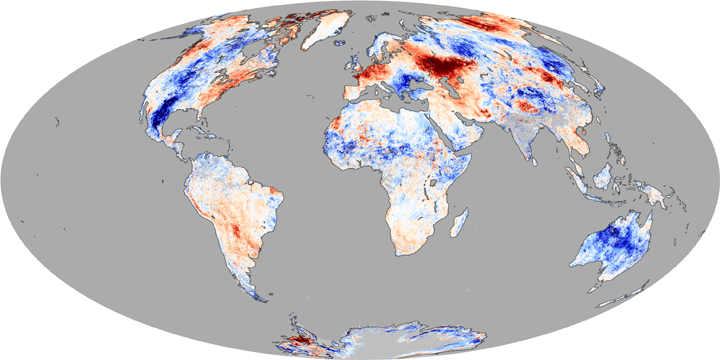 Because this image shows temperature anomalies rather than absolute temperatures, not all red areas are warmer than all blue areas. Red-hued northern Canada, for instance, is not warmer than blue-hued northern Mexico. Although deep red tones predominate along the mid-Atlantic coast, absolute temperatures are probably warmer in the barely orange American Southwest. Unusually warm conditions predominate in South America, but the Southern Hemisphere is in winter.

Heat waves often spark discussions of global warming, but it’s important not to consider a single heat wave evidence of long-term climate change; heat waves can and do occur in any kind of climate. However, climate warming is expected to increase the likelihood of heat waves. Unusually warm temperatures in May and June 2010 continued a long-term trend of warming, especially pronounced in the Arctic.

The Earth Observatory’s Global Maps section provides an animation of monthly land surface temperatures from February 2000 to the present.

Correction: This post originally stated the early July 2010 heat wave was a "global phenomenon." We have revised to make our meaning more precise: many places around the globe experienced heat waves in early July.