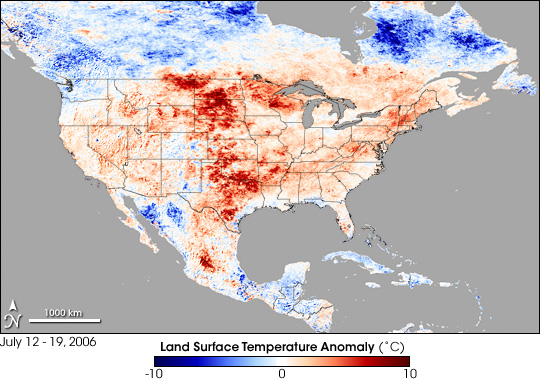 Scorching summer sun, burning pavement, stinging sweat—normal for July. But in July 2006, temperatures climbed above average levels for the previous six years and stayed warm for several days. During mid-July, a heat wave settled over most of the United States, with air temperatures soaring past 100 degrees Fahrenheit (38 Celsius). Land surface temperatures climbed as well, as this image shows. Most of the United States and portions of Canada and Mexico were much warmer than they had been during the same period from 2000 to 2005. Deep red across the Midwest indicates that land surface temperatures were as much as 10 degrees Celsius warmer than the six-year average, and with the exception of the Pacific Northwest and a few other isolated region, the rest of the country was also warmer than average. The heat wave continued past the period shown here, through the end of July. In California alone, the heat killed at least 126 people, reported Reuters on July 29.

This image was created from data collected by the Moderate Resolution Imaging Spectroradiometer (MODIS) on NASA’s Terra satellite between July 12 and July 19, 2006.