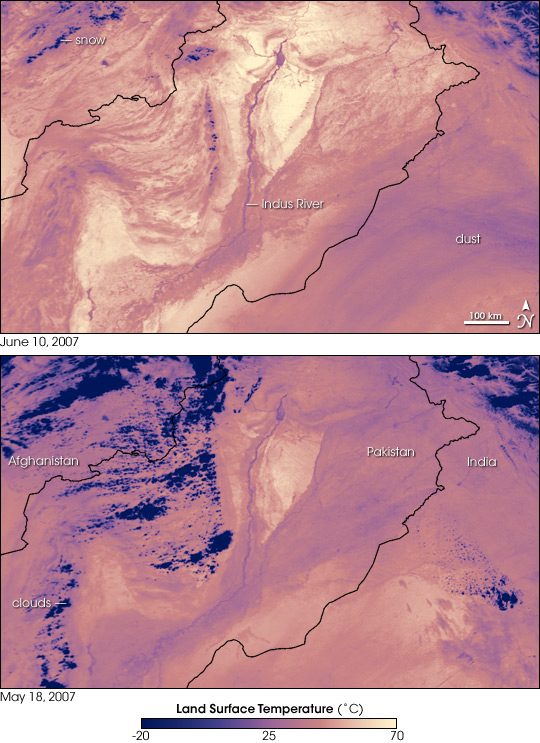 It was not even officially summer in the Northern Hemisphere, but Pakistan was in the midst of a deadly heat wave when the Moderate Resolution Imaging Spectroradiometer (MODIS) on NASA’s Terra satellite captured the top image on June 10, 2007. The image shows land surface temperatures—how hot the land would feel to the touch.

Except for the snow-covered mountain tops in western Pakistan and Afghanistan, land surface temperatures are all on the top end of the scale, as indicated by the prevalence of yellow and warm pink tones in the image. The Indus River is defined by its cooler surface. The vegetation and wetlands surrounding the river are cooler than the sand-and-rock landscape beyond the river valley. Airborne dust over India masks the hot sands of the Great Indian Desert. The lower image shows land surface temperatures on May 18, 2007, well before the heat wave started. The dark purple regions area the frigid tops of clouds. Compared to May 18, yellow tones cover a much wider area in the June image, indicating how much the land surface had warmed.

Land surface temperatures can be warmer or cooler than the air temperatures cited in weather reports. The land takes longer to heat up or cool down than the air. This is why a tile floor is so cold on a chilly winter morning, or why a sandy beach burns your feet on a summer’s day. On June 10, air temperatures in parts of Pakistan reached above 50 degrees Celsius (120 Fahrenheit), and this image indicates that ground temperatures climbed to about 70 degrees Celsius (160 Fahrenheit) in rocky desert regions. By June 13, the heat wave had caused 232 heat-related deaths in Pakistan, said news reports, with additional deaths in neighboring India.