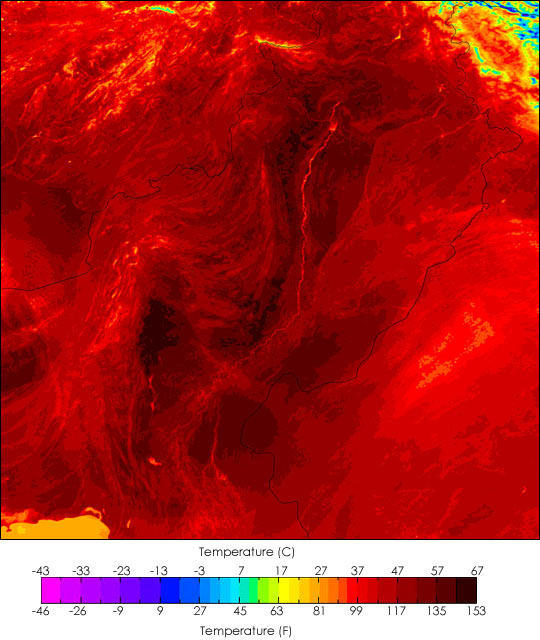 Six people died and dozens more fell ill as temperatures soared to 47 degrees Celsius (116 Fahrenheit) in central Pakistan on May 21 and 22, 2004. Land temperatures, as measured by the Moderate Resolution Imaging Spectroradiometer (MODIS) on NASA’s Aqua satellite, reflected the extreme air temperatures. Afternoon land temperatures are often higher than air temperatures because the land retains heat. In this MODIS image, taken on May 21, the land around the Indus River, the bright red line running from north to south through the center of the image, has reached 67 degrees Celsius (153 Fahrenheit). In the top right corner, the temperature gradient in the Himalaya Mountains might correlate with elevation, as the temperature climbs up the color scale from the frigid, snow-capped peaks (blue) to the hot valleys (red). The pattern is more distinct in the high-resolution image, which shows a larger region to the north, including Afghanistan, Uzbekistan, Tajikistan, India, and China at 500 meters per pixel. The image is available in additional resolutions, including MODIS’ maximum resolution of 250 meters per pixel.