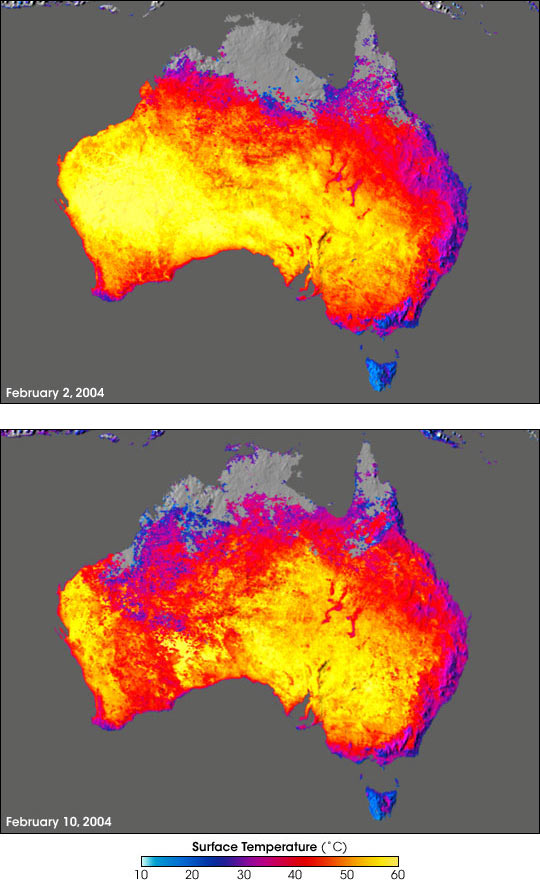 The hot spell is significant not only for its intensity, but also for its duration. By February 20, Adelaide, South Australia, marked its 17th consecutive day with temperatures above 30 degrees Celsius (86 degrees Fahrenheit). These Moderate Resolution Imaging Spectroradiometer (MODIS) images confirm the length of the heat wave. They show the average temperature of the land from February 2 to February 9, and from February 10 to February 17, 2004. The highest temperatures, represented by bright yellow, linger over southeastern Australia throughout both periods.

Temperatures in these images reach up to 60 degrees Celsius (140 degrees Fahrenheit). The apparent discrepancy between reported temperatures and the temperatures that MODIS recorded has to do with the way MODIS measures temperature. The MODIS instrument records the thermal infrared radiative energy, or heat, of the land. Like a glowing stove burner or a light bulb filament, heated objects emit light, though only in some cases is the light visible. By recording the wavelength of the emitted light, scientists can determine how hot an object is. MODIS records the heat coming from the land surface, which can be matched to the temperature. The temperatures that are recorded at weather stations are air temperatures. Land surface temperatures are typically 15 degrees Celsius (27 degrees Fahrenheit) warmer than air temperatures in dry regions when the sky is free of clouds.

For farmers, the heat is particularly bad news. Fruits and vegetables are literally cooking on the plants. Australia’s Stone Fruit Growers Association estimates that up to 30 percent of this year’s stone fruit crop will be lost because of the high temperatures. Tomato and grape growers are also feeling the heat.