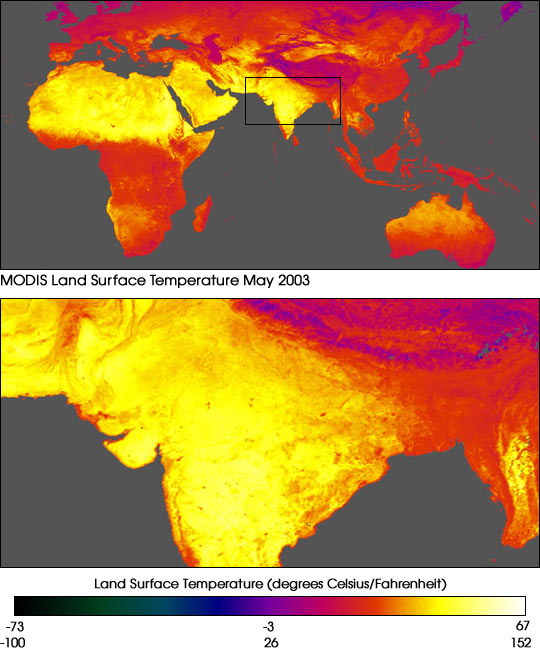 More than 1,300 people have died of heat exhaustion and sunstroke in India as a result of a blistering heat wave plaguing the country throughout the month of May. A wide area of the southern part of the country experienced weeks of temperatures climbing to a scorching 50 degrees Celsius (122 Fahrenheit). The map above shows average land surface temperatures measured by the Moderate Resolution Imaging Spectroradiometer (MODIS) on the Aqua satellite between May 1- 24, 2003. Temperatures range from black (coldest) through green, blue, purple, pink, red, yellow, and white (hottest).

The weeks of persistently high temperatures are evident in the close up image of south-central India, where regions of pale yellow indicate where the land surface temperatures averaged more than 50 degrees C. Parts of India were as hot as Africa’s Sahara Desert (left center of top image). Notice the impact of both vegetation and altitude on land surface temperatures. At top left of the close-up image, the vegetation along the Indus River plain cuts a cooler red swath through the hotter (yellow), more arid terrain. To the right of center, the areas of hot yellow give way to cooler reds in eastern India and Bangladesh, where the Ganges River splits into numerous, vegetation-lined channels before emptying into the Bay of Bengal (lower right). The high peaks of the Himalaya Mountains as well as parts of the Tibetan Plateau appear purplish-pink.

The heat wave has persisted for so long at least in part because the seasonal monsoon rains were a week late. As of June 6, 2003, rains had begun to arrive, giving some regions a desperately needed break from the heat. Much of the country was already struggling with drought after last year’s monsoon failed to deliver much rain. 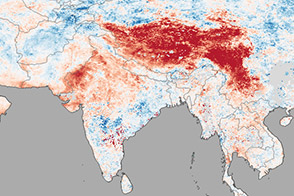